GAMES BROWSE THESAURUS WORD OF THE DAY WORDS AT PLAY SETTINGS
Word of the Day : December 13, 2019

1 : capable of being easily led, taught, or controlled : docile

Docile, obedient, and amenable are synonyms of tractable, but those four words have slightly different shades of meaning. Tractable describes an individual whose character permits easy handling, while docile implies a predisposition to submit readily to authority. Obedient is often used to describe compliance with authority, although that compliance is not necessarily offered eagerly. Amenable, on the other hand, is usually used when someone cooperates out of a desire to be agreeable. Tractable dates from the early 16th century and derives from the Latin verb tractare ("to handle" or "to treat"). Despite the resemblance, this root did not give us the noun tractor or verbs such as contract or attract—those all derive from a loosely related Latin verb trahere ("to draw or pull").

"He also looks … at the biological and cultural implications of 'self-domestication,' a process by which humans school themselves out of their feral nature and into habits of being that moderate violence—though, as he adds, while other domesticated species such as dogs and guinea pigs are 'delightfully tractable,' human adaptability and cultural learning add up to something more." — Kirkus Reviews, 15 Oct. 2018

"The computer scientist Alan Turing noted that the question of whether a machine can think is incredibly difficult to determine, not least because of the lack of a clear definition of 'thinking'; he proposed investigating instead the more tractable question of whether a machine can convince a human interlocutor that it's human—the so-called Turing test." — William Egginton, The New York Times, 17 Mar. 2019

Unscramble the letters to create an antonym of tractable: HHRUILSC. 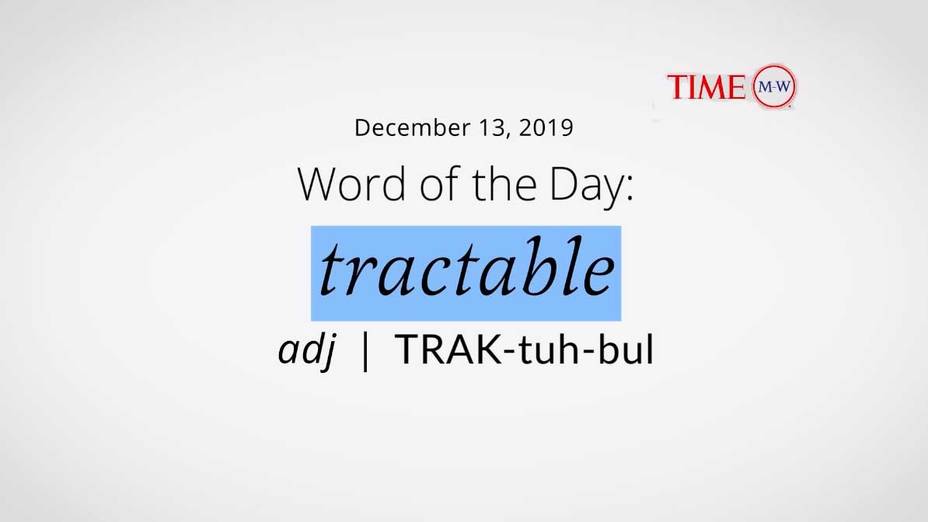