GAMES BROWSE THESAURUS WORD OF THE DAY WORDS AT PLAY SETTINGS
Word of the Day : April 12, 2019

Thole has a long history in the English language. It existed in Middle English in its current form, and in Old English in the form tholian, but in these modern times, it tholes only in a few of England's northern dialects. It has, however, a linguistic cousin far more familiar to most English speakers: the word tolerate traces back to Latin tolerare, meaning "to endure, put up with," and tolerare and tholian share a kinship with the Greek verb tlēnai, meaning "to bear." Unrelated to our featured word thole, there is another (also very old) thole, which can be used as a synonym of peg or pin, or can refer to either of a pair of pins set in the gunwale of a boat to hold an oar in place.

"There was now temptation to resist, as well as pain to thole." — Robert Louis Stevenson, Kidnapped, 1886

"They view bad weather—whether it be a temperature of minus 14 or the northerly wind that comes howling down the loch—as a pleasurable challenge rather than something to be tholed." — Peter Ross, The Scotsman, 1 Oct. 2012

What 4-letter word beginning with "b" is used in dialect as a synonym of the verb thole and is commonly used in a set expression with time? 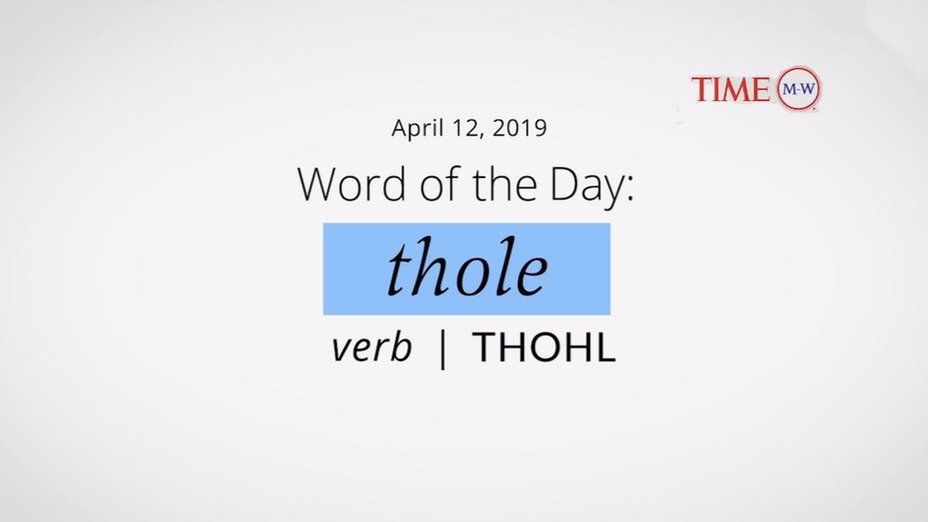