GAMES BROWSE THESAURUS WORD OF THE DAY WORDS AT PLAY SETTINGS
Word of the Day : November 26, 2019

: a group of retainers or attendants

Retinue derives via Middle English from the Anglo-French verb retenir, meaning "to retain." Another word deriving from retenir is retainer, which means, among other things, "one who serves a person of high position or rank." In the 14th century, that high person of rank was usually a noble or a royal of some kind, and retinue referred to that person's collection of servants and companions. Nowadays, the word is often used with a bit of exaggeration to refer to the assistants, guards, publicists, and other people who accompany an actor or other high-profile individual in public. You might also hear such a collection called a suite or entourage, two other words derived from French.

"The Handkerchief Prince was trailed by a retinue of 40 or so Japanese media members, complete with satellite trucks." — Anthony Rieber, Newsday, 29 Mar. 2014

"Russian mezzo-soprano Alisa Kolosova, as the duchess who fully expects to marry Rodolfo, enjoyed the Entrance of Entrances, high on the statue of a horse, dressed in royal velvet, and surrounded by a retinue of similarly dressed minions." — Nancy Malitz, The Chicago Sun-Times, 13 Oct. 2019

Unscramble the letters to create a synonym of retinue: ECGORET. 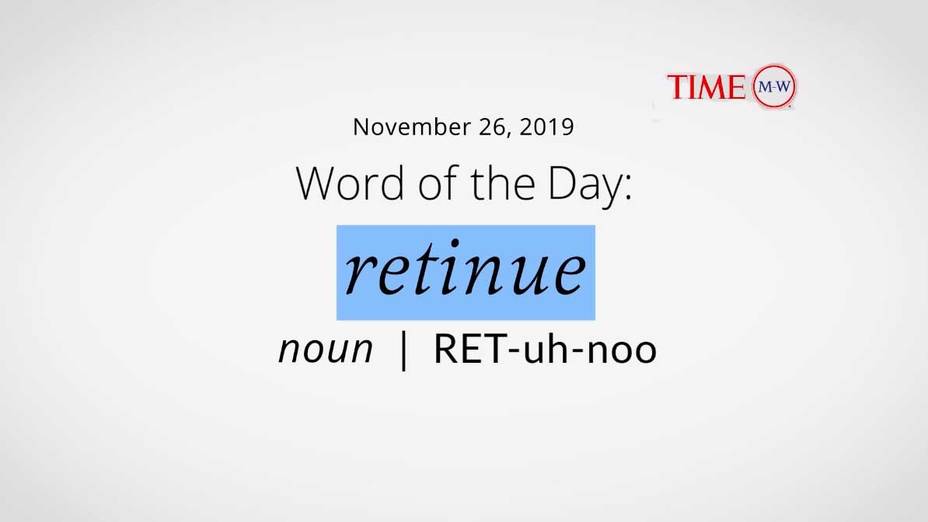 noun - a group of retainers or attendants