GAMES BROWSE THESAURUS WORD OF THE DAY WORDS AT PLAY SETTINGS
Word of the Day : November 27, 2019

1 : to court favor by a cringing or flattering manner

2 : to show affection — used especially of a dog

Some people will be glad to learn the origins of fawn—and there's a hint about the word's etymology in that declaration. Middle English speakers adapted an Old English word meaning "to rejoice" to create the verb faunen, which shifted in spelling over time to become fawn. That Old English word, in turn, derives from fagan, meaning "glad." Fagan is also an ancestor of the English adjective fain, whose earliest (now obsolete) meaning is "happy" or "pleased." This fawn is not, however, related to the noun fawn, referring to a young deer. For that we can thank the Latin noun fetus, meaning "offspring."

"Like tech C.E.O.s today, Edison attracted an enormous following, both because his inventions fundamentally altered the texture of daily life and because he nurtured a media scrum that fawned over every inch of his laboratory and fixated on every minute of his day." — Casey Cep, The New Yorker, 28 Oct. 2019

"I had planned to dislike Remo, the acting professor whose Chekhov class I took last spring. I had planned to feel this way because all the theater people I knew who took his classes fawned over him in a way that drove me nuts." — Eliya O. Smith, The Harvard Crimson, 10 Oct. 2019

What is the meaning of feign? 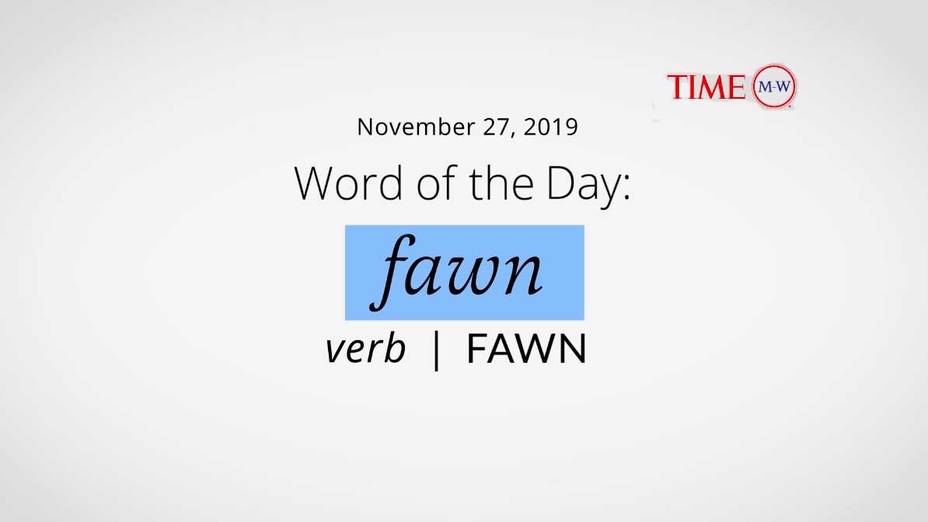 verb - to seek favor by groveling