GAMES BROWSE THESAURUS WORD OF THE DAY WORDS AT PLAY SETTINGS
Word of the Day : January 16, 2020

Hirsute has nearly the same spelling and exactly the same meaning as its Latin parent, hirsutus. The word isn't quite one of a kind, though—it has four close relatives: hirsutism and hirsuties, synonymous nouns naming a medical condition involving excessive hair growth; hirsutal, an adjective meaning "of or relating to hair"; and hirsutulous, a mostly botanical term meaning "slightly hairy" (as in "hirsutulous stems"). The Latin hirsutus is also an etymological cousin to horrēre, meaning "to bristle." Horrēre gave rise to Latin horrōr-, horror, which has the various meanings of "standing stiffly," "bristling," "shivering," "dread," "consternation," and is the source, via Anglo-French, of our word horror. The word horripilation—a fancy word for goose bumps—is also a hirsute relation; its Latin source, horripilāre, means "to shudder," and was formed from horrēre and pilus ("hair").

Turner wore a hirsute mask as part of his werewolf costume for the school play.

"Berry is a stocky, hirsute fellow, with a big, rich voice that immediately calls to mind the word 'thespian' and gives everything he says a sheen of (over)dramatic irony…." — Robert Lloyd, The Los Angeles Times, 3 Dec. 2019 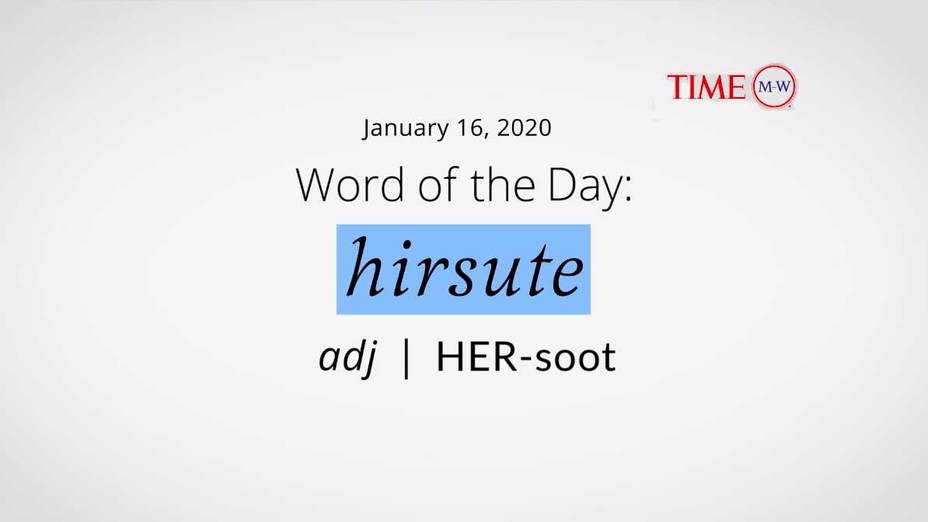