GAMES BROWSE THESAURUS WORD OF THE DAY WORDS AT PLAY SETTINGS
Word of the Day : November 7, 2019

2 : to take up and support as a cause : become attached to

As you might guess, the words espouse and spouse are related, both deriving from the Latin verb spondēre, meaning "to promise" or "to betroth." In fact, the two were once completely interchangeable, with each serving as a noun meaning "a newly married person" or "a husband or wife" and also as a verb meaning "to marry." Their semantic separation began in the 18th century, when the noun espouse fell out of use. Nowadays, espouse is most often seen or heard as a verb used in the figuratively extended sense "to commit to and support as a cause." Spouse continued to be used in both noun and verb forms until the 20th century, when its verb use declined and it came to be used mainly as a noun meaning "husband or wife."

"Tradition associates [the period of the Lyrid meteor showers] with the Chinese teacher and philosopher Confucius, one of the first to espouse the principle: 'Do not do to others what you do not want done to yourself.'" — The Telegraph (UK), 10 Oct. 2019

"The beloved musical [Fiddler on the Roof] was revived entirely in Yiddish…. Directed by Oscar and Tony Award-winner Joel Grey, the timeless show captures the strength of Jewish people and their traditions, while espousing universal themes of love, belonging and community." — Madeleine Fernando, Billboard.com, 3 May 2019

What descendant of spondēre refers to someone who assumes responsibility for another person or thing? 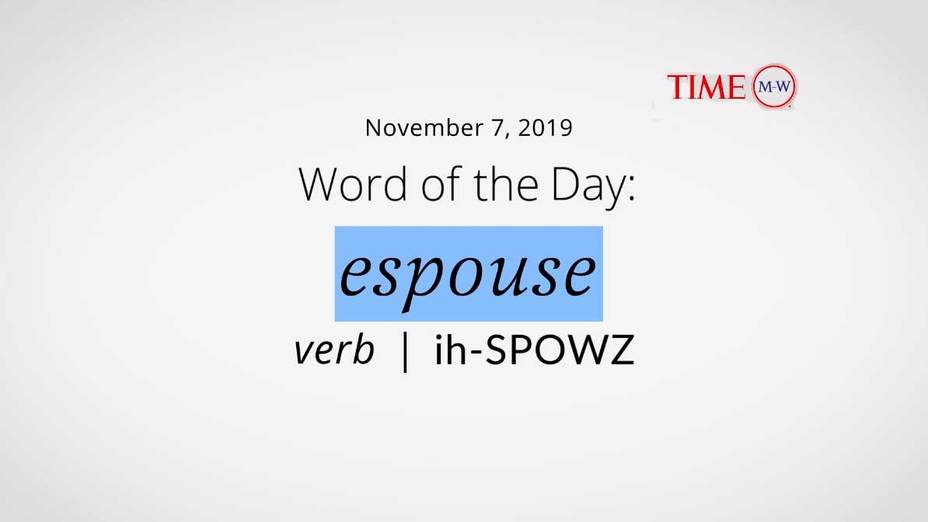 verb - to take up and support as a cause