1 : of, relating to, or written in a simplified form of the ancient Egyptian hieratic writing

2 : of or relating to people and especially their speech : popular, common

3 : of or relating to the form of Modern Greek that is based on everyday speech

You may recognize the root of demotic from words like democracy and demography. The source of these words is the Greek word dēmos, meaning "people." Demotic is often used of everyday forms of language (as opposed to literary or highbrow versions). It entered English in the early 1800s and originally designated a form of ancient Egyptian cursive script which by the 5th century BCE had come into use everywhere in Egypt for business and literary purposes (in contrast to the more complex, hieratic script retained by the clergy). Demotic has a newer specialized sense, as well, referring to a form of Modern Greek that is based on everyday speech and that since 1976 has been the official language of Greece.

"[The Rosetta Stone] features three columns of the same inscription in three languages: Greek, hieroglyphs and demotic Egyptian—and is the text of a decree written by priests in 196 BC, during the reign of pharaoh Ptolemy V." — Ashley Lime, BBC.com, 23 Nov. 2018

"When it came time to make her own wine …, she continued taking the natural path, bent earnestly to the task of revitalizing California winemaking with a demotic, punk-rock spirit." — Jeff Gordinier et al., Esquire, 25 Apr. 2017

What is the meaning of demiurge, a noun based on Greek dēmos? 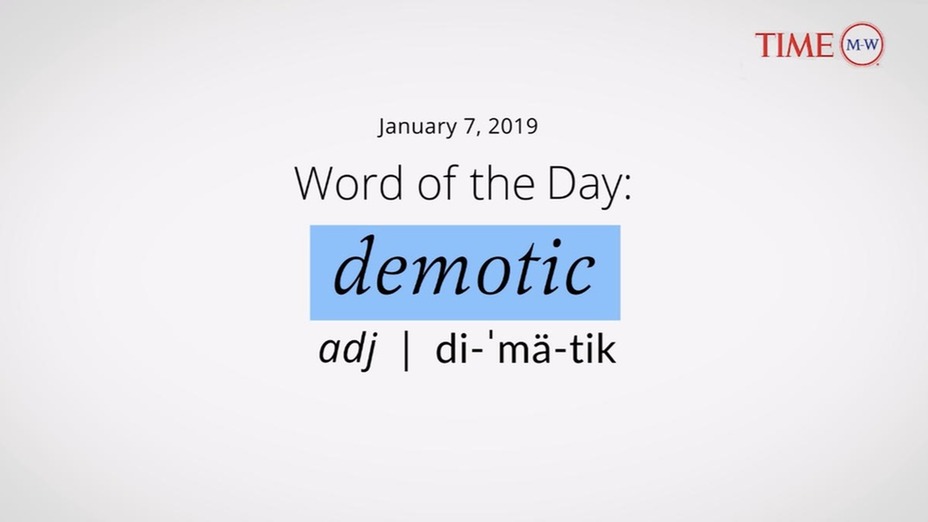