GAMES BROWSE THESAURUS WORD OF THE DAY WORDS AT PLAY SETTINGS
Word of the Day : September 27, 2019

2 : to separate (something) into distinct parts and especially into groups having divergent views

3 : to subject to chemical cleavage

4 : to split especially along the grain

5 : to penetrate or pass through something by or as if by cutting

Cleave has two homographs, each with a distinct origin. There is cleave meaning "to adhere firmly and closely or loyally and unwaveringly," as in "a family that cleaves to tradition"; that one is from Old English clifian, meaning "to adhere." And there is the cleave with meanings relating to splitting and dividing, which derives from Old English clēofan, meaning "to split." The two have slightly different inflections. The "split" cleave usually has cleaved as its past tense form, but cleft and clove are both in use as well; as its past participle form (the form that often occurs with have), cleaved is most common, but cleft and cloven are also used. The "adhere" cleave commonly has cleaved or clove (and occasionally clave) as its past tense and cleaved as its past participle.

"The surface you're cutting against will have a greater impact on your knife's edge than the food you're chopping up, assuming you aren't regularly cleaving through massive bones." — Paul Stephen, The San Antonio Express News, 10 July 2019

"Of course, single-item restaurants are nothing new.... But they don't usually serve something so divisive as polenta. You see, the slow-cooked dish of maize cleaves opinion like a Justin Bieber concert. You either love it or loathe it—and ever has it been so." — Samuel Muston, The Independent (London), 30 Jan. 2014

Fill in the blanks to complete a noun that refers to a narrow opening or crack: _ i _ s _ r _. 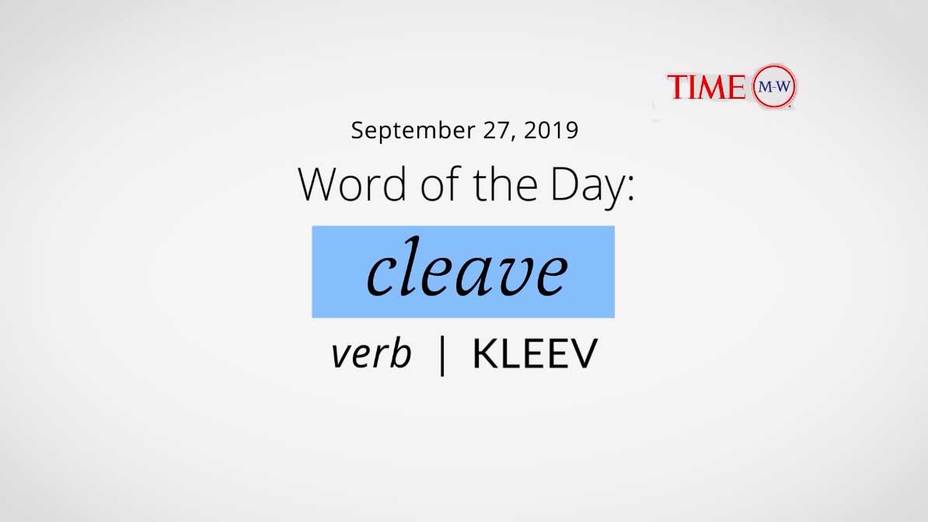 verb - to split or to separate into parts