1
: to make a solemn declaration under oath for the purpose of establishing a fact (as in a court)
2
a
: to make a statement based on personal knowledge or belief : bear witness
b
: to serve as evidence or proof
3
: to express a personal conviction

1
a
: to bear witness to : attest
b
: to serve as evidence of : prove
2
: to declare under oath before a tribunal or officially constituted public body
3
archaic
a
: to make known (a personal conviction)
b
: to give evidence of : show
testifier
ˈte-stə-ˌfī(-ə)r

She refused to testify about who had given her the information. She testified before Congress today. He agreed to testify against his drug dealer. He testified that he'd seen two people leave the building on the night of the murder. These statistics testify that the program is working. Several people testified during the revival meeting. See More
Recent Examples on the Web Trump is not charged in the case and is not expected to testify or attend the trial.

Michael R. Sisak, Fortune, 23 Nov. 2022 Siebel Newsom has not yet taken the stand, but is expected to testify in the two-month trial.

Elizabeth Wagmeister, Variety, 11 Nov. 2022 Rhodes is the second witness to testify for the defenses, which began making their cases Thursday.

Ella Lee, USA TODAY, 5 Nov. 2022 Reynolds was the youngest witness to testify in the trial against Chauvin, who was found guilty of three charges in Floyd’s killing.

Adrienne Broaddus, CNN, 15 Oct. 2022 Last month, Paxton reportedly fled his home in a truck driven by his wife in order to avoid being served a subpoena to testify in the lawsuit.

These example sentences are selected automatically from various online news sources to reflect current usage of the word 'testify.' Views expressed in the examples do not represent the opinion of Merriam-Webster or its editors. Send us feedback.

14th century, in the meaning defined at intransitive sense 2a 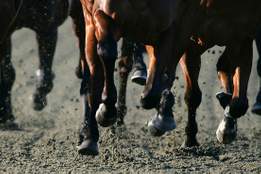 testified; testifying
1
a
: to make a statement based on personal knowledge or belief
could testify to the student's devotion to her studies
b
: to make a formal statement of what one swears is true
testified in court
2
: to give outward proof : serve as a sign of
yawns testifying to fatigue
testifier
-ˌfī(-ə)r

: to make a solemn declaration under oath or affirmation for the purpose of establishing a fact : give testimony

: to declare in testimony
testifier noun

History and Etymology for testify

More from Merriam-Webster on testify