: to give a series of rhythmic taps
Other Words from tattoo Did you know? Phrases Containing tattoo Learn More About tattoo

The less common noun tattoo comes from the Dutch colloquialism "tap toe," which can be translated as "turn off the tap," though it was most often used to mean something like "Shut up! Cease!" The Dutch began using the word taptoe for a drum beat, and then English speakers borrowed the term (changing it slightly, to taptoo and, eventually, to tattoo). It was used especially by the military to name a drum beat (or possibly a bugle call) that signaled the day's end. This taptoo most likely led to our taps, a term for the final bugle call at night in the military.

Listen to Our Podcast About tattoo 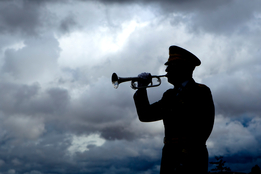