1 : a weapon (such as a cutlass or rapier) with a long blade for cutting or thrusting that is often used as a symbol of honor or authority
2a : an agency or instrument of destruction or combat
b : the use of force the pen is mightier than the sword— E. G. Bulwer-Lytton
3 : coercive power
4 : something that resembles a sword
at swords' points
: mutually antagonistic : ready to fight

Other Words from sword

Examples of sword in a Sentence

once upon a time dueling with swords was the gentlemanly way to settle a point of honor
Recent Examples on the Web Eno’s futuristic synthwork tango on the edge of a samurai sword. — Ron Hart, SPIN, 25 Apr. 2022 Chris Heward: My character was killed with a samurai sword. — CBS News, 23 Apr. 2022 Tcheng has treated patients high on methamphetamines who are convinced a mouse is crawling inside their body or that someone has cut off their genitals with a sword. — Heather Knight, San Francisco Chronicle, 9 Mar. 2022 Erected in 1981, the monument depicts a woman with a sword in one hand and a shield embossed with a hammer and sickle in the other. — Jane Recker, Smithsonian Magazine, 3 Mar. 2022 And a man who stabbed his unarmed neighbor with a sword. — Washington Post, 26 Feb. 2022 The Israelites have rejected your covenant, torn down your altars, and put your prophets to death with the sword. — Terry Pluto, cleveland, 12 Feb. 2022 Their wives have slept with other men, and this drives them to grief, to madness—Shahzaman skewers his wife and her lover with a sword—and to a quest to find someone unluckier than them. — Yasmine Al-sayyad, The New Yorker, 24 Jan. 2022 An Alabama man who police say killed his mother with a sword and left his bedridden uncle in critical condition on Sunday was arrested after a car chase shortly after the incident, reports said. — Fox News, 18 Jan. 2022 See More

These example sentences are selected automatically from various online news sources to reflect current usage of the word 'sword.' Views expressed in the examples do not represent the opinion of Merriam-Webster or its editors. Send us feedback.

First Known Use of sword

History and Etymology for sword

The first known use of sword was before the 12th century 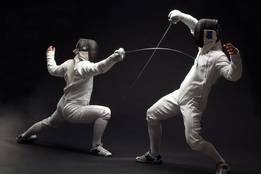 Living by the Sword: On ‘Forte’ and ‘Foible’

Etymology on the cutting edge.

: a weapon having a long blade usually with a sharp point and edge

More from Merriam-Webster on sword