1
: one who presents a candidate for baptism or confirmation and undertakes responsibility for the person's religious education or spiritual welfare
2
: one who assumes responsibility for some other person or thing
3
: a person or an organization that pays for or plans and carries out a project or activity
especially : one that pays the cost of a radio or television program usually in return for advertising time during its course
sponsorial
spän-ˈsȯr-ē-əl

: to be or stand sponsor for

Noun Our company is a sponsor of the race. I have over 50 sponsors for next week's race. Her sponsors include a major sneaker company. He agreed to be my sponsor so that I could join the club. The senator is a sponsor of the proposed bill. Verb The radio station sponsored the concert. The tournament is sponsored by local businesses. Will you sponsor me for the charity race? He sponsored me at my confirmation. She sponsored the new tax bill. See More
Recent Examples on the Web
Noun
The apparent Distributed Denial-of-Service (DDoS) attack came as the E.U. legislative body voted to designate Moscow a state sponsor of terrorism.

Marc Santora, BostonGlobe.com, 24 Nov. 2022 The European Parliament on Wednesday overwhelmingly backed a resolution labeling Russia a state sponsor of terrorism for its invasion of and actions in Ukraine.

Thomas Gibbons-neff, New York Times, 23 Nov. 2022 The European Parliament on Wednesday overwhelmingly backed a resolution labeling Russia a state sponsor of terrorism for its invasion of and actions in Ukraine.

John Leicester And Sam Mednick, Anchorage Daily News, 23 Nov. 2022 Both Republican and Democratic administrations have classified the Islamic Republic of Iran as the world's worst state-sponsor of terrorism.

Benjamin Weinthal, Fox News, 31 Oct. 2022 Ukraine's President Volodymyr Zelenskyy has pushed the U.S. to designate Russia as a state sponsor of terrorism, which installs secondary sanctions -- penalizing any business or entity that does business with the country.

Shannon K. Crawford, ABC News, 30 Sep. 2022 The bipartisan pair is also pushing for passage of legislation that would designate Russia a state sponsor of terror for over its actions in Ukraine.

Kim Hjelmgaard, USA TODAY, 30 Sep. 2022
Verb
Council member Dave Alvord did not co-sponsor the measure but did vote to approve it.

Blake Apgar, The Salt Lake Tribune, 23 Nov. 2022 Every employer with five or more workers in California is required either to sponsor a retirement plan or to sign their workers up for CalSavers.

Los Angeles Times, 9 Nov. 2022 If electric vehicles are the wave of the future, then why don’t the auto companies band together and sponsor a transcontinental EV race?

Will Langhorne, Arkansas Online, 2 July 2022 Data for Progress also found through public polling in early May that a majority of likely voters—54%—disapprove of corporations that donate to politicians who sponsor anti-LGBTQ+ legislation.

Colin Lodewick, Fortune, 1 June 2022 Those final energy totals will be passed on to AES Indiana, formerly Indianapolis Power and Light, and Heritage Interactive Services, who will then sponsor renewable energy certificates and carbon offsets to ensure the carbon footprint is neutral.

London Gibson, The Indianapolis Star, 25 Mar. 2021 Those who sponsor unlawful mass gatherings could face fines of up to $15,000.

Steve Bittenbender, Washington Examiner, 7 Oct. 2020 The Beer Scouts, a group of co-workers who sponsor volunteer events, have logged more than 7,800 volunteer hours in the past three years.

These example sentences are selected automatically from various online news sources to reflect current usage of the word 'sponsor.' Views expressed in the examples do not represent the opinion of Merriam-Webster or its editors. Send us feedback.

Late Latin, from Latin, guarantor, surety, from spondēre to promise — more at spouse

1869, in the meaning defined above 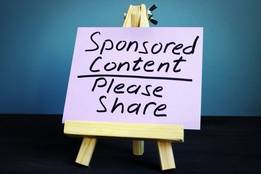 Trust us, it’s the best money can buy

: to act as sponsor for

spon·​sor
1
: a legislator who introduces and supports a legislative proposal (as a bill or amendment)
2
: a person who assumes responsibility for some other person (as an immigrant) or thing
3
a
: one that securitizes assets
b
: one that promotes, advocates, or favors a business venture (as investment in a security or limited partnership)
sponsor verb
sponsorship noun

More from Merriam-Webster on sponsor