1
: to move irregularly to and fro
2
: to vibrate especially as the result of a blow or shock
3
: to tremble as a result of physical or emotional disturbance
shook with fear
4
: to experience a state of instability : totter
5
: to briskly move something to and fro or up and down especially in order to mix
6
: to clasp hands
7
: trill entry 2

1
: to brandish, wave, or flourish often in a threatening manner
protesters shaking their fists
2
: to cause to move to and fro, up and down, or from side to side especially in a repetitive, rhythmic, or quick jerky manner
shook his head in disapproval
3
: to cause to quake, quiver, or tremble
4
a
: to free oneself from
shake a habit
shake off a cold
b
: to get away from : get rid of
can you shake your friend? I want to talk to you alone

Elmer Davis
5
: to lessen the stability of : weaken
shake one's faith
6
: to bring to a specified condition by or as if by repeated quick jerky movements
shook himself loose from the man's grasp
7
: to dislodge or eject by quick jerky movements of the support or container
shook the dust from the cloth
8
: to clasp (hands) in greeting or farewell or as a sign of goodwill or agreement
9
: to stir the feelings of : upset, agitate
shook her up
10
: trill entry 2
shakable adjective
or shakeable
ˈshā-kə-bəl

1
: an act of shaking: such as
a
: an act of shaking hands
b
: an act of shaking oneself
2
a
: a blow or shock that upsets the equilibrium or disturbs the balance of something
b
: earthquake
3
shakes plural
a
: a condition of trembling or nervousness
specifically : delirium tremens
b
: malaria sense 1a
4
: something produced by shaking: such as
a
: a fissure separating annual rings of growth in timber
b(1)
: milkshake
(2)
: a beverage resembling a milkshake
a protein shake
5
: a wavering, quivering, or alternating motion caused by a blow or shock
6
: trill
7
: a very brief period of time
I'll be there in two shakes
8
shakes plural : one that is exceptional especially in importance, ability, or merit —usually used in the phrase no great shakes
9
: a shingle split from a piece of log usually three or four feet (about one meter) long
10
: deal entry 2 sense 3
a fair shake
Phrases
shake a leg
1
: dance
2
: to hurry up
shake a stick at
: to form a conception of (as by counting or imagining) : conceive —usually used in the phrase more than one can shake a stick at

shake, agitate, rock, convulse mean to move up and down or to and fro with some violence.

shake often carries a further implication of a particular purpose.

agitate suggests a violent and prolonged tossing or stirring.

an ocean agitated by storms

rock suggests a swinging or swaying motion resulting from violent impact or upheaval.

the whole city was rocked by the explosion

convulse suggests a violent pulling or wrenching as of a body in a paroxysm.

spectators were convulsed with laughter

Verb The ground shook during the earthquake. The house shook as the train rumbled by. The earthquake shook the ground. Shake the salad dressing well before using it. I was so nervous that I was shaking like a leaf. The fugitive couldn't shake the police. It's hard to shake the feeling that I'm forgetting something. The news did nothing to shake my belief that things will be okay. Nothing could shake his faith in God. Noun He responded to the question with a shake of his head. Give the dice a shake. He drank too much coffee and got a bad case of the shakes. See More
Recent Examples on the Web
Verb
What would Coldplay's halftime show have even been without Bruno Mars and Beyonce dropping by to shake things up?

Paul Myerberg, USA TODAY, 20 Nov. 2022 One way to shake things up is with a surprising wine.

Mike Rose, cleveland, 14 Nov. 2022 However, an enticing offer to pursue bigger horizons has the potential to shake that up!

Chicago Tribune, 2 Nov. 2022 The freshman Cup leader of two full-time entries in the sport’s premier division wants to shake things up, and his philanthropic side is well-known to those in the garage and beyond.

Joseph Wolkin, Forbes, 4 Oct. 2022 Asian stocks were mixed Tuesday ahead of the U.S. midterm elections with trading likely to stay bumpy in a week that brings new inflation data and other events that could shake markets.

al, 3 Nov. 2022
Noun
In addition, the roundtable discusses the latest shake-up at Disney that sees the return of Bob Iger as CEO and the ousting of Bob Chapek after a tumultuous year of scrutiny.

Clayton Davis, Variety, 24 Nov. 2022 One of the most notable luxury fashion brands is getting a shake-up.

Carly Thomas, The Hollywood Reporter, 23 Nov. 2022 This month, however, Trian Fund Management purchased more than $800 million of Disney stock and started pushing for its own shake-up and cost cuts.

Jesse Newman, WSJ, 9 Nov. 2022 As part of the shake-up, Mark Murphy was promoted to president from chief operating officer.

Nick Turner, Fortune, 3 Nov. 2022 Expect some big shake-ups this month, but trust that whatever (or whoever) is falling apart in your life will be replaced by something even greater than your mind could conjure.

Meghan Rose, Glamour, 1 Nov. 2022 Elon Musk's acquisition of Twitter has already led to some major shake-ups at the company.

CBS News, 31 Oct. 2022 Grahame-Smith’s departure comes in the wake of the Warner Bros.-Discovery merger and other shake-ups at Warner Bros. TV and DC Films, including the recent exit of executive Walter Hamada. 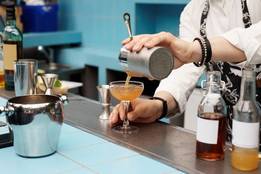 ; shaking
1
: to move irregularly to and fro : quiver, tremble
shaking with cold
2
: to become unsteady : totter
3
: to cause to move in a usually quick jerky manner
4
: to free oneself from
shake off a cold
5
: to cause to become weaker
shake one's faith
6
: to force out of a place by quick jerky movements
shake dust from a blanket
7
: to clasp (hands) in greeting or as a sign of goodwill or agreement
shake a leg
: to hurry up
shakable
ˈshā-kə-bəl
adjective

1
: an act of shaking
2
plural : a condition of trembling (as from chill)
3
: something produced by shaking
especially : milk shake
4
: a very brief period of time
ready in two shakes
5
plural : one that stands out especially in importance, ability, or merit —usually used in the phrase no great shakes
6
: a long shingle
7
: deal entry 3 sense 2
a fair shake