Definition of radio (Entry 2 of 4)

Definition of radio (Entry 3 of 4)

1 : to send or communicate by radio
2 : to send a radio message to

: to send or communicate something by radio

Examples of radio in a Sentence

These example sentences are selected automatically from various online news sources to reflect current usage of the word 'radio.' Views expressed in the examples do not represent the opinion of Merriam-Webster or its editors. Send us feedback.

First Known Use of radio

1913, in the meaning defined at transitive sense 1

History and Etymology for radio

The first known use of radio was in 1887 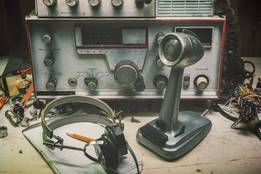 1 : the process that is used for sending or receiving signals by means of electromagnetic waves without a connecting wire
2 : a device that receives signals sent by radio
3 : programs that are broadcast by radio
4 : a device used to both send and receive messages by radio
5 : the radio broadcasting industry

Kids Definition of radio (Entry 2 of 3)

1 : of or relating to radio waves
2 : of, relating to, or used in radio broadcasting

Kids Definition of radio (Entry 3 of 3)

: to communicate or send a message to by radio

More from Merriam-Webster on radio