Definition of populist (Entry 2 of 2)

1 often capitalized : of, relating to, or characterized by populism
2a : popular sense 1
b : popular sense 2
Other Words from populist Example Sentences Learn More About populist

Other Words from populist

Examples of populist in a Sentence

Recent Examples on the Web: Noun Now, with his approval ratings in steep decline, the far-right populist is again revving up the culture wars. — Los Angeles Times, 29 Mar. 2022 Agence France-Presse/Getty Images Latin America, or much of it, is moving to the populist left, and Chile became the latest example by electing socialist Gabriel Boric in Sunday’s presidential runoff election. — The Editorial Board, WSJ, 20 Dec. 2021 Then another populist went down, in Slovenia, where the country’s three-time prime minister, Janez Jansa, lost to a loose coalition of centrist rivals in parliamentary elections on Sunday. — New York Times, 25 Apr. 2022 French President Emmanuel Macron cruised to a second term Sunday, beating back a stronger-than-expected challenge from a far-right populist who has attacked the European Union and NATO and expressed support for Russia. — David Jackson, USA TODAY, 24 Apr. 2022 Le Pen worked hard to detoxify her and her party’s image, casting herself as an empathetic economic populist. — Washington Post, 10 Apr. 2022 But Hawley, who has cultivated a reputation as a hardline populist conservative with a particular emphasis on pro-family policies, remained committed to pressing the point. — Michael Warren, CNN, 23 Mar. 2022 Russian elites have been saying that for 30 years, and capitalizing on those sentiments is catnip for an authoritarian populist like Putin. — Jordan Michael Smith, The New Republic, 3 Mar. 2022 Moreover, when Democrats began their progressive turn in 1894–96, they were led by a Bible-thumping prairie populist, William Jennings Bryan, who ended his career as a caricatured hate object for progressives in the Scopes Monkey Trial. — Dan Mclaughlin, National Review, 16 Mar. 2022 Recent Examples on the Web: Adjective In his recent public statements, Scott has shifted closer to Johnson’s and Trump’s more populist political rhetoric, which has come to dominate Republican primaries. — Michael Scherer And Josh Dawsey, Anchorage Daily News, 18 Apr. 2022 The center-right liberal party of Ronald Reagan has become the antiliberal right-wing populist party of Donald Trump and his imitators. — Damon Linker, The Week, 14 Mar. 2022 The new dogma hasn’t been fully articulated publicly, but Mr. Kim has adopted populist rhetoric and cast blame on technocrats. — Timothy W. Martin, WSJ, 30 Dec. 2021 Its simple metrical principles, conversational modes, and inclusion of everyday speech make an implicit populist argument. — Matthew Carey Salyer, Forbes, 25 May 2021 Poland, also governed by a right-wing populist government, is Hungary's most loyal partner in the EU. — Justin Spike, ajc, 4 Apr. 2022 Like Hungary, Poland, with a right-wing populist government, had an acrimonious relationship with the European Union before the war. — Washington Post, 2 Apr. 2022 Poland’s right-wing populist government has been embraced by both Brussels and Washington as a linchpin of Western solidarity and security. — New York Times, 25 Mar. 2022 When infections began to rise in the fall, the country's populist government was reluctant to act. — Ivana Kottasová, CNN, 13 Oct. 2020 See More

These example sentences are selected automatically from various online news sources to reflect current usage of the word 'populist.' Views expressed in the examples do not represent the opinion of Merriam-Webster or its editors. Send us feedback.

First Known Use of populist

History and Etymology for populist

The first known use of populist was in 1891 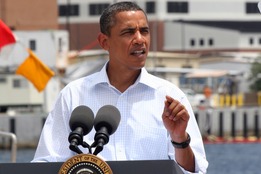 President Obama tries his hand at lexicography during a recent press conference.

More from Merriam-Webster on populist

Thesaurus: All synonyms and antonyms for populist