1
: the quality or state of being equal or equivalent
Women have fought for parity with men in the workplace.
2
a
: equivalence of a commodity price expressed in one currency to its price expressed in another
The two currencies are approaching parity for the first time in decades.
b
: equality of purchasing power established by law between different kinds of money at a given ratio
3
: an equivalence between farmers' current purchasing power and their purchasing power at a selected base period maintained by government support of agricultural commodity prices
… parity is the price calculated to give the farmer a fair return in relation to the things he must buy.—

New York Times
4
a
: the property of an integer with respect to being odd or even
3 and 7 have the same parity
b(1)
: the state of being odd or even used as the basis of a method of detecting errors in binary-coded data (see binary entry 2 sense 5)
(2)
: parity bit
5
: the property of oddness or evenness of a quantum mechanical function
6
: the symmetry of behavior in an interaction of a physical entity (such as a subatomic particle) with that of its mirror image (see mirror image sense 1a)

: the state or fact of having borne offspring
also : the number of children previously borne

Parity has special meanings in such fields as physics, math, medicine, genetics, and marketing. Back when the Soviet Union and the U.S. were opposing superpowers, there was often talk of parity in nuclear weapons between the two sides. We sometimes hear about parity between mental and physical health in insurance coverage, or parity in colleges' funding of men's and women's athletics. But parity may be most common in discussions of currencies. The exchange rate between two national currencies often changes every day, as each drifts higher or lower, and occasionally two similar currencies, such as the euro and the U.S. dollar, will achieve parity, but it rarely lasts long.

1877, in the meaning defined above 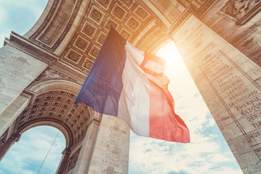 Dictionary lookups from the stars, politics, and the French Revolution

noun
par·​i·​ty
ˈpar-ət-ē
plural parities
: the quality or state of being equal or equivalent : equality

plural parities
1
: the state or fact of having borne offspring
diagnosis of parity or nulliparity
2
: the number of times a female has given birth counting multiple births as one and usually including stillbirths
gravidity and parity were highly correlated
compare gravidity sense 2

More from Merriam-Webster on parity