1
: a confused mixture : medley
2
: a mixture of fruits or vegetables served as a salad or cocktail or in a jellied dessert or used in a sauce or as a garnish

Macédoine is the French name for Macedonia, a region on the Balkan Peninsula that is now part of Greece, the Republic of North Macedonia, and Bulgaria. Historically, this area has been home to a richly varied population encompassing many ethnic groups. Etymologists believe that the cultural heterogeneity of the region may have inspired people to use its name as a generic term for any kind of wildly jumbled mixture. English speakers borrowed "macédoine" early in the 19th century. The word took on its more specific "salad" sense later in the century.

a quirky secondhand bookstore with a macédoine of out-of-print titles
Recent Examples on the Web It was surrounded by a classic macedoine of strawberries with basil.

These example sentences are selected automatically from various online news sources to reflect current usage of the word 'macédoine.' Views expressed in the examples do not represent the opinion of Merriam-Webster or its editors. Send us feedback.

French, from Macédoine Macedonia; perhaps from the mixture of ethnic groups in Macedonia 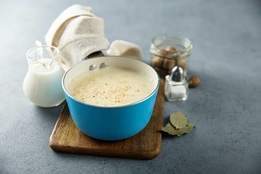