1 : not interested in or concerned about something She was amazed that people could be so indifferent about the trial. [=could care so little about the trial] The movie was poorly received by an indifferent public.
2 : neither good nor bad : not very good She was tired and gave a rather indifferent [=unimpressive] performance. indifferent [=mediocre] leadership Was the food good, bad, or indifferent?

Choose the Right Synonym for indifferent

indifferent, unconcerned, incurious, aloof, detached, disinterested mean not showing or feeling interest. indifferent implies neutrality of attitude from lack of inclination, preference, or prejudice. indifferent to the dictates of fashion unconcerned suggests a lack of sensitivity or regard for others' needs or troubles. unconcerned about the homeless incurious implies an inability to take a normal interest due to dullness of mind or to self-centeredness. incurious about the world aloof suggests a cool reserve arising from a sense of superiority or disdain for inferiors or from shyness. aloof from his coworkers detached implies an objective attitude achieved through absence of prejudice or selfishness. observed family gatherings with detached amusement disinterested implies a circumstantial freedom from concern for personal or especially financial advantage that enables one to judge or advise without bias. judged by a panel of disinterested observers

The Many Shades of Indifferent

Many of the words in our language have more than a single meaning. In most cases we have little trouble distinguishing them; we understand, based on the context in which each is used, that the English of "the English language" is different from the English used in billiards or pool ("spin around the vertical axis deliberately imparted to a ball that is driven or rolled"). In other cases, such as with the word indifferent, it can be a bit confusing. Indifferent may mean "unbiased," "apathetic," "mediocre," "unimportant," and several other things. Some of these senses are distinguished by the words commonly used with them; the "apathetic" sense, for instance, is typically followed by the preposition to. When using indifferent in your own writing take care that the surrounding words offer your reader sufficient context to prevent confusion.

Examples of indifferent in a Sentence

It can hardly be argued, by himself or by his defenders, that he was indifferent to, or unaware of, the true situation. — Christopher Hitchens, Harper's, March 2001 … aspects of language that the earlier grammarians were indifferent to. — Geoffrey Nunberg, Atlantic, December 1983 For it is commonly said and commonly believed that science is completely neutral and indifferent as to the ends and values which move men to act … — John Dewey, Freedom and Culture, 1939 The movie was poorly received by an indifferent public. Was the food good, bad, or indifferent?
See More

Recent Examples on the Web Biden remains oddly indifferent to the risk of inflation. — Andrew Stuttaford, National Review, 24 Sep. 2021 Throughout its history, the Cannes Film Festival has been openly indifferent to documentaries. — Keaton Bell, Vogue, 7 July 2021 The Maels are, however, indifferent as to whether this will ever lead to Rock and Roll Hall of fame consideration. — Gary Graff, cleveland, 24 June 2021 Smith was famously indifferent to distinctions among his efforts. — Karen Wilkin, WSJ, 29 May 2021 Trump was wholly indifferent to the scientific consensus around a warming planet, allergic to multilateral diplomacy, and insisted throughout that efforts to mitigate climate change were not in the U.S. national interest. — Washington Post, 23 Apr. 2021 With the help of Nazi propaganda, Germans became increasingly indifferent to the plight of their Jewish neighbors. — Sara J. Bloomfield, Time, 8 Apr. 2021 Can Democrats expect to be rewarded for their results or are voters indifferent to policy achievements? — Josh Boak, ajc, 5 Nov. 2021 Republicans are indifferent to Democrats’ ambitious plans to knit a social safety net. — Philip Elliott, Time, 28 Oct. 2021

These example sentences are selected automatically from various online news sources to reflect current usage of the word 'indifferent.' Views expressed in the examples do not represent the opinion of Merriam-Webster or its editors. Send us feedback.

First Known Use of indifferent

History and Etymology for indifferent

The first known use of indifferent was in the 14th century 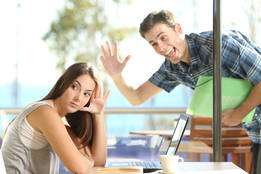 Why does 'indifferent' have so many...

Why does 'indifferent' have so many meanings?

How to differentiate between them

1 : not interested or concerned about something She's indifferent about your problems.
2 : neither good nor bad an indifferent performance

1 : having or exhibiting a lack of affect, concern, or care
2a : not differentiated indifferent tissues of the human body
b : capable of development in more than one direction especially : not yet embryologically determined

More from Merriam-Webster on indifferent