: a use of spells or verbal charms spoken or sung as a part of a ritual of magic
also : a written or recited formula of words designed to produce a particular effect
incantational
ˌin-ˌkan-ˈtā-sh(ə-)nəl

Incantation comes directly from the Latin word incantare, "enchant". Incantare itself has cantare as a root, which reminds us that magic and ritual have always been associated with chanting and music. Incantations have often been in strange languages; "Abracadabra" is a not-so-serious version of an incantation.

trying to produce a miracle by incantation hovering over the sick child, the witch doctor muttered mysterious incantations
Recent Examples on the Web What might just look like just a very old jar might actually be a jar that Filipinos once believed could hold the spirits of their ancestors after saying an incantation.

Kayla Samoy, Chicago Tribune, 25 Oct. 2022 The Afghan tricolors that had flown above the airport terminal had been replaced with the Taliban’s banner, a white flag inscribed with an Islamic incantation written in black Arabic script: There is no God but God.

ELLE, 20 Oct. 2022 Three children evacuated from the Blitz complicate her life and the plot, which centers on a quest for the most potent incantation of them all.

Los Angeles Times, 12 Oct. 2022 As the lip-smacking, incantation-hurling Winifred, Midler gorges herself anew on the scenery and sometimes blasts it with lightning bolts.

Celia Wren, Washington Post, 15 Sep. 2022 It has even been compared to alchemy, or incantation.

Wired, 18 July 2022 In high, tremulous voices, the Sisters of the Holy Family were chanting their midday prayers when a child’s gleeful shout echoed from a nearby corridor, punctuating the solemn incantation.

Los Angeles Times, 17 May 2022 Its stretches of incantation turn into something like a sacred rite.

These example sentences are selected automatically from various online news sources to reflect current usage of the word 'incantation.' Views expressed in the examples do not represent the opinion of Merriam-Webster or its editors. Send us feedback. 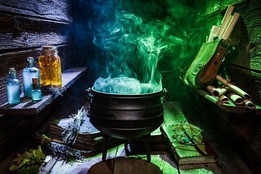 : a series of words used to produce a magic spell

More from Merriam-Webster on incantation