1
: cemetery
2
: something resembling a graveyard
an automobile graveyard

reflecting the Quaker avoidance of personal vanity, the graveyard is not marked by so much as a single headstone
Recent Examples on the Web But a new book suggests that the U.S. does not have to be a graveyard for companies from the U.K., or indeed anywhere else. —

Roger Trapp, Forbes, 22 Jan. 2023 The Baltic is also a giant graveyard for unexploded munitions and chemical weapons dumped after the World Wars. —

Justin Scheck, New York Times, 26 Dec. 2022 The beach by my home was a graveyard for eiders, guillemots, gulls, curlews and other birds, many of which succumbed to their own pandemic — avian flu — which has been devastating seabirds throughout Canada’s Atlantic provinces. —

Jane Alexander, CNN, 9 Dec. 2022 My computer is a graveyard of unfinished novel scripts. —

Jonas Shaffer, Baltimore Sun, 5 Oct. 2022 Before the initial search began, people here had long suspected there could be a graveyard near the now-defunct Kamloops Indian Residential School. —

Kim Mackrael, WSJ, 23 May 2022 Rock promotion has represented for a long time the most perilous edge of the entertainment industry and there is a graveyard filled with those who didn’t survive. —

Rick Kogan, chicagotribune.com, 31 Mar. 2022 These new and radically human spaces will be cherished and will serve each resident and visitor for many years to come, instead of joining the graveyard of drab structures that none of us ever really cared to care for. —

These example sentences are selected automatically from various online news sources to reflect current usage of the word 'graveyard.' Views expressed in the examples do not represent the opinion of Merriam-Webster or its editors. Send us feedback. 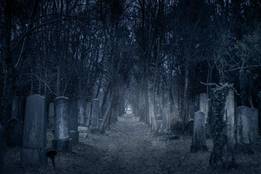 Unearthing the Spelling of 'Cemetery'...

More from Merriam-Webster on graveyard