: to fail especially in an examination or course

: an act or instance of flunking

Dave Seminara, WSJ, 2 May 2022 He was accused of harassing M.O. over two years and threatening to flunk her for not taking part in the Pledge of Allegiance. —

Fox News, 30 Mar. 2022 The colt crossed the finish line first in the Derby on May 1, only to flunk a postrace test for a corticosteroid that is prohibited on raceday. —

New York Times, 27 Aug. 2021 The Michigan legislature had chosen this year, of all years, to enforce a strict new literacy law: Any third grader who could not read proficiently by May could flunk and be held back. —

Annie Waldman, ProPublica, 3 July 2021 And journalists would raise their game, not flunk big stories like Brexit and Mr. Trump’s rise. —

Tunku Varadarajan, WSJ, 8 June 2021 Such interactions could lead to wrongful arrest, prosecution, and government liens for those who’ve done nothing more than flunk a flawed algorithmic test. —

Albert Fox Cahn, Wired, 9 June 2021 Companies that scored below a certain threshold would flunk the test, leading either to remedial action or, potentially, a ban. —

Annie Brown, Forbes, 7 Apr. 2021
Noun
Or, perhaps some schools will consider this to be an act of cheating that causes the student to get an automatic flunk. —

Lance Eliot, Forbes, 18 Dec. 2022 Facilities that ace their inspections are on track to get up to five stars, whereas those that flunk will struggle to get more than one or two stars. —

New York Times, 9 Dec. 2021 However, all three flunk the smell test, and two of them fell by the wayside before the Legislature adjourned last week. —

Sean P. Murphy, BostonGlobe.com, 5 July 2019 And some students in general courses may test poorly or don't do their homework and flunk tests, educators say. —

These example sentences are selected automatically from various online news sources to reflect current usage of the word 'flunk.' Views expressed in the examples do not represent the opinion of Merriam-Webster or its editors. Send us feedback.

perhaps blend of flinch and funk

1823, in the meaning defined at intransitive sense

1846, in the meaning defined above 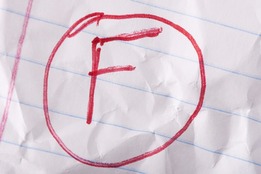 More from Merriam-Webster on flunk