1 : to bend especially repeatedly
2a : to move muscles so as to cause flexion of (a joint)
b : to move or tense (a muscle) by contraction
3 : use, demonstrate flexing her skills as a singer

1 : bend
2 informal
a : to talk in a boastful or aggressive way "Bronze" is one of the most straightforward new tracks: a boastful and insidiously dark song that sees him flexing about his many wins.— Raisa Bruner — often used with on to indicate the person, group, etc. at whom the talk is directed Hip-hop has never just been about selling drugs, flexing on haters, and threatening enemies, as many like to portray it.— Aaron Williams… he … went searching for criticism, then tried to flex on a random criticizer.— Ashley Feinberg"… And if President Trump is going to continue to flex on China, whether it's with tariffs, whether it's just talking tough and tweeting tough, that still draws a very stark contrast between himself and the Democratic Party. …"— Mattie Duppler
b : to make an ostentatious display of something : show off While tons of influencers love to flex on Instagram via designer bags and other luxury splurges, others are all about that perfect high-low balance …— Bella Gerard — often used with on to indicate the person, group, etc. at whom the display is directed It's in-your-face branding that is all about flexing on your friends in their more common, more conventional limousines.— Max Finkel
flex one's muscles
: to demonstrate one's strength an exaggerated need to flex his political muscles— J. P. Lash

1 : an act or instance of flexing or bending [Trae] Young finished with 22 points, seven assists and two steals—and a muscle flex after the game-winner.— Chris Vivlamore
2 : flexibility, pliancy The … fillet blade has a nice flex to it.— Matt Foster
3 informal : an act of bragging or showing off Monster (1994) was R.E.M.'s weird flex: an over-the-top rock album saturated with distortion, propelled by power chords and guitar feedback, and voiced by singer Michael Stipe's newly found enthusiasm.— David Gill

Examples of flex in a Sentence

Verb He flexed the muscles of his right arm. a material that flexes easily

First Known Use of flex

circa 1521, in the meaning defined at transitive sense 1

History and Etymology for flex

borrowed from Latin flexus, past participle of flectere "to cause to go in a different direction, bend, curve," of uncertain origin

Our Reviews team has selected the best resistance bands.

The first known use of flex was circa 1521 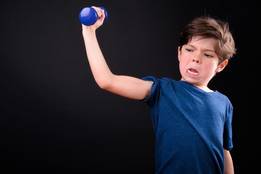 Just what’s so weird about that...

1 : to bend especially again and again Can you flex your fingers?
2 : to move or tense (a muscle)

1 : to bend especially repeatedly
2a : to move muscles so as to cause flexion of (a joint) stretching and flexing his knees
b : to move or tense (a muscle or muscles) by contraction flexed their biceps

More from Merriam-Webster on flex