1
: a commendatory oration or writing especially in honor of one deceased
she delivered the eulogy at his funeral
2
: high praise
eulogistic
ˌyü-lə-ˈji-stik

Both elegy and eulogy may be used about writing or speech in remembrance of a person who has passed away, and this semantic overlap creates the potential for confusion. Elegy (which may be traced to the Greek word elegos, “song of mourning”) commonly refers to a song or poem lamenting one who is dead; the word may also refer somewhat figuratively to a nostalgic poem, or to a kind of musical composition. While eulogy is also commonly found referring to words about the deceased, its basic meaning, both in English and in the Greek language from which it was borrowed, is “praise.” Formed from the Greek roots eu “good” and logos “speech,” a eulogy is an encomium given for one who is either living or dead. If you are praising your partner’s unsurpassed beauty or commending the virtues of the deceased at a funeral, you are delivering a eulogy; if you are composing a lamenting reminiscence about a person who has long since passed, you are writing an elegy.

Eulogies Aren't Only for Funerals

With its -logy ending, eulogy means literally something like "good speech". We are told to speak only good of the dead, but a eulogist actually makes a speech in the dead person's honor--or often instead for someone living, who might actually be there in the audience. The most famous eulogies include Lincoln's Gettysburg Address and Pericles' funeral oration for the Athenian warriors; but these are only two of the many great eulogies, which continue to be delivered not only at funerals and memorial services but at retirement parties, anniversary parties, and birthday parties.

Choose the Right Synonym for eulogy

encomium implies enthusiasm and warmth in praising a person or a thing.

eulogy applies to a prepared speech or writing extolling the virtues and services of a person.

tribute implies deeply felt praise conveyed either through words or through a significant act.

citation applies to the formal praise of a person offered in a military dispatch or in awarding an honorary degree.

He delivered a moving eulogy at his father's funeral. several eulogies were given at the special assembly marking the retirement of the company's longtime president
Recent Examples on the Web The family held a public funeral for both at St. Monica’s, and Caruso delivered a eulogy. —

Phoebe Natanson, ABC News, 4 Jan. 2023 The tragic loss of the author’s college best friend serves as the centerpiece to this memoir that’s both heartbreaking eulogy and poignant coming-of-age storytelling. —

Seija Rankin, The Hollywood Reporter, 24 Dec. 2022 The answer lies in another aspect of the postwar economic order for which Bunch’s book serves as a kind of eulogy. —

Jake Bittle, The New Republic, 19 Oct. 2022 Dame Helen Mirren's transcendent performance as Her Majesty won her the Academy Award for best actress in 2007, and her tribute in her acceptance speech is as apt a eulogy as any. —

Maria Puente And Jeff Stinson, USA TODAY, 8 Sep. 2022 In the coming days, Tate would sit at his desk in the office behind the sanctuary to write the eulogy for yet another young Black man killed by gun violence. —

Noelle Crombie, The Oregonian - OregonLive.com, 16 Dec. 2022 When Germann died in 2018, his family asked Wilson to deliver the eulogy at his memorial service. —

These example sentences are selected automatically from various online news sources to reflect current usage of the word 'eulogy.' Views expressed in the examples do not represent the opinion of Merriam-Webster or its editors. Send us feedback. 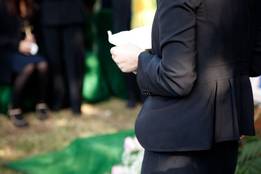 More from Merriam-Webster on eulogy