1
: any of numerous pigeons
especially : a small wild pigeon
2
: a gentle woman or child
3
: one who takes a conciliatory attitude and advocates negotiations and compromise
especially : an opponent of war compare hawk entry 1
dovish
ˈdə-vish

past tense of dive

Noun The President sided with the doves and worked to avoid war. the doves were in favor of using the surplus to improve the nation's schools and not its weapons systems
Recent Examples on the Web
Noun
Bobo dove, fully extending his body and his arms, but could not come up with the ball, the crowd gasping in disappointment after defeat was assured for the 19½-point favorite Bruins (8-2 overall, 5-2 Pac-12).

Ben Bolch, Los Angeles Times, 12 Nov. 2022 Segura dove to his left, snagged it, got up, threw to first, and then put on a show that had the crowd dancing in their seats.

James Marson, WSJ, 29 Jan. 2022 As Ullmark dove with his stick, Mangiapane hit the side of the net.

Vogue, 29 Sep. 2022 Over the weekend, one Reddit thread dove head first into the Android vs. iPhone war with a simple question: Why will some Android users never switch to iPhone?

These example sentences are selected automatically from various online news sources to reflect current usage of the word 'dove.' Views expressed in the examples do not represent the opinion of Merriam-Webster or its editors. Send us feedback.

Note: The modern English outcome with [ʌ] presupposes shortening of (or variation with) a Middle English form with ọ̄, itself presupposing Old English ŭ affected by Middle English open-syllable lengthening. Middle English spellings such as douve, however, would seem to require an Old English long vowel, as do the Germanic cognates. These issues were pointed out by E. J. Dobson (English Pronunciation, 1500-1700, 2. edition, Oxford, 1968, p. 514), who follows the Oxford English Dictionary's suggestion that the noun is related to Old English dūfan "to dive, plunge (into a liquid)" (see dive entry 1) and that the forms with long and short u reflect different ablaut grades of dūfan (a class II strong verb). Essentially the same solution, without the discussion of the English details, is proposed by G. Kroonen (Etymological Dictionary of Proto-Germanic, Brill, 2013). The difficulty with this hypothesis is that the noun in Germanic languages uniformly means "dove, pigeon," not an aquatic bird. Another proposal associates *dūƀōn- with the Celtic etymon of Old Irish dub "dark, black," Old Welsh dub, Welsh du, on the assumption that a dove is "the dark bird." But such a source, usually derived, together with Germanic *dauƀa- "deaf, senseless" (see deaf) and Greek typhlós "blind, dark," from Indo-European *dhubh-, *dheu̯bh-, could not regularly produce a long u. The Oxford Dictionary of English Etymology, the etymological successor to the Oxford English Dictionary, abandons the dive connection and says simply "presumed to be imitative of the bird's note." 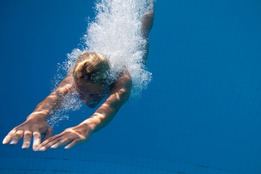 1
: any of numerous pigeons
especially : a small wild pigeon
2
: a person who opposes war or warlike policies
dovish
-ish

past and past participle of dive

More from Merriam-Webster on dove