ˈka-rē-,
-ˌän
1
British : carrying-on
2
: a piece of luggage suitable for being carried aboard an airplane by a passenger

: carried or suitable for being carried aboard
carry-on baggage

carried on; carrying on; carries on

: to continue doing, pursuing, or operating
carry on research
carried on the business

1
: to continue especially in spite of hindrance or discouragement
chose to carry on despite the weather
2
: to behave or speak in a foolish, excited, or improper manner
shocked at how he carries on

Verb a toddler crying and carrying on in the store she bravely carried on despite the loss of her husband
Recent Examples on the Web
Verb
But, over time and with ample encouragement from the Kremlin, the general public was able to carry on with life and not think too much about the war.

Matthew Bodner, NBC News, 21 Sep. 2022 New models are supposed to carry on the legacy of the ones that came before.

WIRED, 16 Sep. 2022 Knock-on disruptions are expected to carry on into Monday.

CNN, 16 Sep. 2022 Fellow reporters who were members of Investigative Reporters & Editors were determined to carry on in Bolles’ name.

James Rainey And Brittny Mejia, Anchorage Daily News, 11 Sep. 2022 Fellow reporters who were members of Investigative Reporters & Editors were determined to carry on in Bolles’ name.

James Rainey, Los Angeles Times, 9 Sep. 2022 But luckily, all those guys survived and were able to carry on beyond and hopefully make it to future seasons of the show.

Kristen Baldwin, EW.com, 9 Sep. 2022 Currently owned by the Wornick family, who planted their first vines on the property in the 1990s are selling in hopes that another family will carry on the legacy of this incredible estate.

Emma Reynolds, Robb Report, 29 July 2022 While Terri said the family still misses Steve daily, their mission is to carry on his legacy and passion for conservation.

These example sentences are selected automatically from various online news sources to reflect current usage of the word 'carry-on.' Views expressed in the examples do not represent the opinion of Merriam-Webster or its editors. Send us feedback.

1638, in the meaning defined at transitive sense 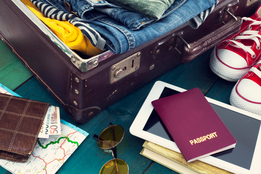 What's the difference between 'luggage'...

More from Merriam-Webster on carry-on