Merriam-Webster’s Word of the year is determined by data: the word must be frequently looked up at Merriam-Webster.com, and it must show a significant increase in lookups over the previous year.

Our Word of the Year for 2018 is justice. It was a top lookup throughout the year, with the entry being consulted 74% more than in 2017. By looking at how spikes in our data correspond to certain news events and stories reported in the media we can get a sense of what drove many people to look up justice so much more frequently this year. The general rise in lookups tells us that there was a great deal of interest in this word, and the specific spikes give us insight into some of the reasons why. 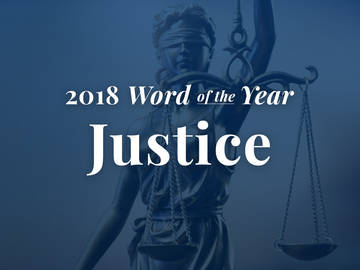 'Justice' saw lookup traffic related to a wide variety of sources, from the Department of Justice to the Kavanaugh hearings to concepts such as social, economic, and criminal justice.

The concept of justice has been at the center of many of our national debates in the past year: racial justice, social justice, criminal justice, economic justice. In any conversation about these topics, the question of just what exactly we mean when we use the term justice is relevant, and part of the discussion.

This year’s news had many stories involving the division within the executive branch of government responsible for the enforcement of laws: the Department of Justice. It’s sometimes referred to simply as “Justice,” including in President Trump’s tweets. Curiosity about the word justice correlated with news stories involving the Justice Department a number of times in 2018, as when the Department reversed its policy of lenient enforcement of marijuana laws, announced its support for a lawsuit against opioid manufacturers, proposed a ban on bump stocks, and began an investigation of Tesla. Of course, the Mueller investigation itself is constantly in the news, and is being carried out through the Justice Department. The term obstruction of justice spiked on August 1, the day that President Trump tweeted his wish for Attorney General Jeff Sessions to stop the Mueller investigation.

Different uses of the word justice that corresponded to heavy lookup traffic include the story in August about the arrest of a Nazi prison guard, described in headlines as having had a “long flight from justice,” and when Madonna said that she “couldn’t do justice” to Aretha Franklin in the brief time allotted to her during an awards show shortly after the Queen of Soul had died. Another big news story included yet another meaning of the word justice, as a synonym or title for “judge,” used frequently during the Kavanaugh confirmation hearings for the Supreme Court.

Justice might seem like too common a word to warrant frequent dictionary consultation, but it’s often familiar words for abstract concepts (like integrity, pragmatic, and democracy) that are among the most looked up words. We’ve seen over the years that when common words are used in contexts that are very specific, technical, or legal, people look them up in the dictionary for the detail and nuance that a definition can provide.

Justice has varied meanings that do a lot of work in the language—meanings that range from the technical and legal to the lofty and philosophical. For many reasons and for many meanings, one thing’s for sure: justice has been on the minds of many people in 2018.

Here are ten more notable words that sent people to the dictionary in 2018:

For more details on why these words were frequently looked up this year, check out our Word of the Year 2018 Gallery.