Merriam-Webster’s Word of the Year is a quantitative measure of interest in a particular word. Our online dictionary gives us insight into the collective curiosity of the public, with millions of words looked up every month. When we look back at the past twelve months and combine an analysis of words that have seen a rise over the previous year along with instances of intense spikes of interest because of news events, we see that one word stands out in both categories. 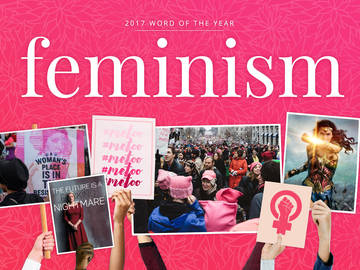 Our largest spike in lookups for 'feminism' was after the Women's March on Washington.

Merriam-Webster's Word of the Year for 2017 is feminism. The word was a top lookup throughout the year, showing a 70% increase over 2016. It also saw several spikes in lookups that corresponded to various news reports and events during the year. The general rise in lookups tells us that many people are interested in this word; specific spikes give us insight into some of the reasons why.

In the last weeks of January, feminism spiked following news coverage of the Women's March on Washington, DC (and other related marches held around the country and internationally), and follow-up discussions regarding whether the march was feminist, and what kind of feminism was represented by organizers and attendees. The word was in the air.

Similarly, discussions around whether feminism was inclusive caused lookups to spike in late February, when Kellyanne Conway said during an onstage interview at a conservative conference that she didn't consider herself a feminist "in the classic sense because it seems to be very anti-male and it certainly is very pro-abortion, in this context." As with other words that spiked this year, such as fact and complicit, the definition of feminism was itself the subject of the news story—an invitation for many people to look up the word.

Interest in the dictionary definition of feminism was also driven by entertainment this year: we saw increased lookups after the release of both Hulu’s series The Handmaid's Tale and the Wonder Woman film, starring Gal Gadot.

More recently, lookups of feminism have been increasing in conjunction with the many accounts of sexual assault and harassment in the news. As the country witnessed a number of women coming forward to share their stories with journalists, many more women joined in on social media using the #MeToo hashtag to say that they too have been affected by such behavior. The string of breaking news stories regarding the resignations, firings, or dismissals of men who have been charged with sexual harassment or assault has kept this story in the news.

Feminism was first entered in an English dictionary by Noah Webster in 1841 with the definition “the qualities of females.” Today’s definitions read: “the theory of the political, economic, and social equality of the sexes” and “organized activity on behalf of women's rights and interests.”

No one word can ever encapsulate all the news, events, or stories of a given year—particularly a year with so much news and so many stories. But when a single word is looked up in great volume, and also stands out as one associated with several different important stories, we can learn something about ourselves through the prism of vocabulary. There is an ongoing national conversation, and Merriam-Webster has a front-row seat.

Here are nine more notable words that sent people to the dictionary in 2017:

For more details on why these words were frequently looked up this year, check out our Word of the Year 2017 Gallery.