And 'mood board' too

Let’s say you’re a collection of sounds that communicates meaning. You are, in other words, a word. Now let’s say you really, really want to be entered in a Merriam-Webster dictionary but you know that not enough people have noticed you yet. You’re hoping to qualify for dictionary entry but just don’t know how to make it happen. So you do what lots of hopeful humans do: you create a vision board, and you place it somewhere you’ll notice it daily. With any luck, visualizing your hope will help it become reality.

The word vision board may be busy making one of these as we type—who knows? 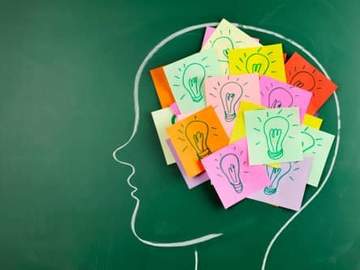 If you can dream of being in the dictionary, you can do it?

But what exactly is a vision board? Typically when people refer to a vision board they are talking about a piece of poster board or other similar material that one attaches items such as magazine clippings, photos, fabric swatches, memos, and notes to as a way of visualizing a hoped-for future. The term vision boarding is also used.

Definitions of vision boarding vary, but Dr. Tara Swart, a London-based neuroscientist and executive advisor, defines it as a collage, preferably made by hand, that literally and metaphorically represents things that you want to happen in your life. Swart ... uses the concept of selective filtering to explain how vision boards keep us focused on long-term goals. “We’re bombarded with information,” she says, “If you don’t prime your brain and keep reminding it of what it is that you really, really want, it’s so easy to just do the day job, put food on the table.”
— Lane Florsheim, The Wall Street Journal Magazine, 22 Jan. 2021

The term mood board is sometimes used with the same meaning.

Having always thought that mood boards or vision boards were something that only creative youngsters made for their personal or school projects, I was delighted to find that mood boards are actually vital tools within many industries. Mood boards are a way for businesses to get on the same page as their clients and they are used by interior designers, fashion designers, event planners, and more.
— Phoebe Avison, Bustle, 18 Nov. 2015

Both terms are built on the board of bulletin board (or the British noticeboard)—a flat surface often mounted on a wall, for posting messages, pictures, etc. It’s a meaning of board that the Oxford English Dictionary dates to around 1400.

Earliest Use of 'Vision Board'

The earliest evidence we’ve found in our preliminary research places the origin of vision board in the United Kingdom, and in the sphere of city planning:

"We have had over 2,500 suggestions from the public on how to improve their city," [council leader Kevin Stephens] said. "As the strategy of the city plan will largely come from the results of this consultation process, I would encourage as many people as possible to come along to their local events and have their say over the next few weeks." … Today … officers will be at Tuffley Community Centre for an informal session at which people will be able to place action cards on to the council's "vision board."
— The Gloucester Citizen (Gloucestershire County, UK), 30 Sept. 1999

There is also evidence from India at around the same time.

So what is SKB finally selling? Physical or emotional relief? ''The ultimate goal is the healing touch. The emotional trigger. We want consumers to trust us,'' [Shailesh K Ayyangar, executive vice president, marketing and sales, SKB] Ayyangar says. As a continuing process, the company has a vision board to chalk out short-, mid-, and long-term plans. It looks beyond what it has, how to extend the brand equity, explore new areas and identify opportunities.
— The Economic Times (Mumbai, India), 15 Oct. 2000

Mood board appears to be a bit older than vision board, and it seems to have been born into the territory it now most often inhabits.

[Designer Raymond] Waites develops collections this way: "I work in my head, then do thumbnail sketches that not another human being in the world can decipher. Then I do a 'mood board.' I'll use fabric swatches, pull pictures of a chair out of publications, pictures out of people's homes and say, 'Isn't this wonderful?’”
— Elaine Markoutsas, The Chicago Tribune, 24 Mar. 1985

Are 'Mood Board' and 'Vision Board' the Same?

The two terms are not, however, universally considered synonymous. Many people see them as distinct.

Put simply: a vision board is a visual representation of your goals, says media and life coach Zakiya Larry. These typically poster-sized visuals, contain all kinds of images and text that represent a goal (or goals) you have.… Though similar, vision boards and mood boards are not one and the same. A vision board relates to your life direction, says Larry. A mood board, on the other hand, is more of a planning tool used for aesthetics—decorating a room or planning a party scheme, for example.
— Brigitt Earley, The Oprah Magazine, 26 Nov. 2019

In addition to the two, the term dream board also has some use, and seems to be about as old as vision board.

[Real estate developer Virginia] Ballou kept a "dream board" on the back of her bedroom door, which she used to help visualize whatever she wanted to accomplish, [Brenda] Dabney said. "She would say, 'If you want the good, you have to visualize it.'"
— Frank Zoretich, The Albuquerque (New Mexico) Times, 7 May 2003

Will any of the three attain the goal we’ve imagined for their anthropomorphized selves? That remains to be seen.