We'll make this as quick as possible.

The online world is full of acronyms. It's also full of elaborate screeds about any number of topics. Which is how we came to have TL;DR.

TL;DR means "too long; didn't read," and it functions (in various forms, including tl;dr, TLDR, and tldr) in a variety of ways, all of them about dealing with prolixity—that is, the use of excess words. It's an accusation lobbed at the prolix; it's an apology used to own one's prolixity; and it's a path of escape from prolixity. 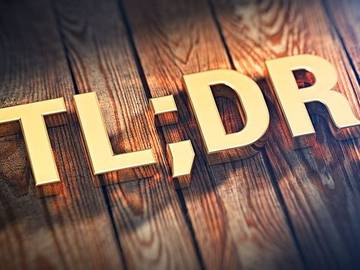 We're gonna go on for just a bit longer.

TL;DR most likely got its start on Usenet in the early aughts, and it continues to be most at home on newsgroups and other electronic public forums. But these days TL;DR is also turning up in the likes of The New York Times and The Houston Chronicle:

A good Saturday [crossword puzzle] clue, in my opinion, will make your heart sink a little. It will take some work, there will be a point at which you hold your head in your hands, and then you will solve it…. So, tl;dr: By the time you get to Saturday puzzles, relinquish the idea that you won't have to look anything up. There's no shame in learning something new.
— Deb Amlen, The New York Times, 17 June 2017

Apple ended the year on an apologetic note Thursday with an online note from CEO Tim Cook saying the company was sorry for the way it handled the issue of older iPhones slowing down due to aging batteries. The tl;dr is this: To prevent sudden shutdowns of older iPhones because their processors were making power demands the batteries couldn't meet, Apple added a "feature" in iOS 10.2.1 last year that smoothed out these peaks. That caused iPhones of a certain age to behave sluggishly, leading some to speculate that Apple was doing this to get its customers to buy newer phones.
— Dwight Silverman, The Houston Chronicle, 30 Dec. 2017

The use here is typical: it introduces a summary of the main point or key message being made in the larger text. Increasingly publications are using it to identify regular features that provide summarizing information.

Even Congress has taken a shine to it:

Congressman Seth Moulton (D-MA), Congressman Mark Meadows (R-NC), and Congressman Dave Loebsack (D-IA) announced introduction of TL;DR—the "Too Long, Didn't Read" Act. The TL;DR Act would direct the Office of Management and Budget to require agencies to place important action items at the beginning of communication with constituents, when they are allowed or required to complete an action item.
— Congressional Documents and Publications, 17 Mar. 2018

It's used as an abbreviation (or as an initialism, if you're among those who like to distinguish between the two):

It was 70 years ago that poet W.H. Auden published "The Age of Anxiety," a six-part verse framing modern humankind's condition over the course of more than 100 pages, and now it seems we are too rattled to even sit down and read something that long (or as the Internet would say, tl;dr—for "too long; didn't read").
— Alex Williams, The San Diego Union Tribune, 25 July 2017

And it's used as a noun:

The TL;DR of all this, of course, is that you can't actually "disappear" from the Internet, even if you're a famous band. Which means that the best way to avoid unwanted digital traces may be simply to never make them.
— Caitlin Dewey, The Washington Post Blogs, 2 May 2016

And as a noun it's used before other nouns attributively, so that it looks like an adjective:

On Wired.com Gareth Harris wrote, "once you sail, you can feel it in your bones. It has been said that whenever two sailboats meet it becomes a race—who knows the wind, the water, and their boat the best?" A few lubbers dropped the "tl;dr" bomb (too long; didn't read): "I hate it when people on the Internet try to write stories that sound like novels," complained Mark Pomponi.
— Wired, April 2013

TL;DR also comes close to fitting into the classification of contronym—a word having two meanings that contradict one another. It introduces a summary—that is, a brief, concise treatment of a topic—and it identifies something that's too darn long:

A lot of these reports fall into the TLDR (Too Long, Didn't Read) pile.
— Rajeev Thakkar, The Economic Times, 7 Feb. 2018

Either way, it's probably too useful to ignore.