Sometimes when bears mate a baby word gets born.

In the spring of 2006, the untimely death of a very unlucky bear introduced to the English language the need for a new word, and thus was born a pair of linguistic fraternal twins: pizzly and grolar. 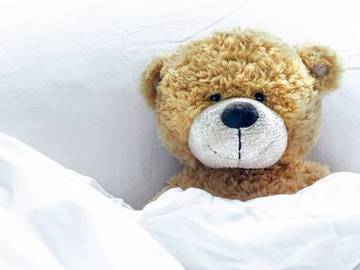 Note: photographs of real pizzlies are about as rare as the animals themselves.

A hunter thought he'd sighted a male polar bear out on the ice of the Canadian Arctic, but his quarry wasn't quite what he was expecting. Its fur was the right color, but it had the long claws and humped back of a grizzly bear, as well as a grizzly's facial structural features. An analysis of the bear's DNA showed that it was in fact a hybrid—half grizzly bear and half polar bear.

That particular bear was not unique. Climate change is bringing bear species that have mostly lived apart into mating proximity:

The polar bear population in Canada's western Hudson Bay region is falling, partly due to the declining ice. Female polar bears are forced ashore up to two weeks earlier than in the early 1990s because of the early spring ice breakup…. At the same time, grizzly bears are moving north into polar bear territory. There have already been sightings of a grizzly-polar bear hybrid, confirmed by DNA analyses, which is called a pizzly by some and a grolar by others.
— John P. Smol, Nature, 1 Mar. 2012

With hybrids being found (only occasionally, at this point) in the wild, one question is what to call them. Both pizzly bear and grolar bear are, as mentioned in the above example, currently in use, with some making a distinction between the two, depending on parentage:

Scientists have now confirmed instances of resulting wild hybrids, known either as "grolars" or "pizzlies," depending on the parental combination.
— Bradnee Chambers, The Ottawa Citizen, 21 Oct. 2017

But other sources treat the two names as equivalent:

Animals at high latitudes—where related species tend to have diverged more recently and can therefore interbreed more easily—are shifting their ranges in response to rising temperatures and melting sea ice. As they do, they may encounter cousins and hybridize…. The best-known examples of this process are the polar bear-grizzly hybrids, sometimes referred to as grolar or pizzly bears, four of which have been shot by hunters in recent years; genetic testing indicated that one of them was a second-generation animal.
— Moises Velasquez-Manoff, The New York Times Magazine, 14 Aug. 2014

We'll be watching to see if either term has staying power. In the meanwhile, we're keeping our fingers crossed for the bears' staying power.