Figurative use of the term 'nuclear option' is relatively new 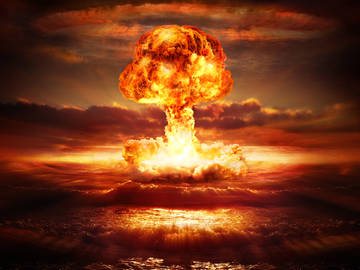 It wasn't until the early 21st century that 'nuclear option' began to describe a procedure by which the voting requirements are changed to require only a simple majority, thus ending the minority party's ability to prevent a vote.

There were nuances to this literal use of nuclear option. It could mean “a choice as to the manner of using nuclear weapons”:

[Stewart] Alsop interviews McNamara and details the bold steps the Defense Secretary has taken to avoid such spasm strategy and to follow instead a series of nuclear “options” in which nuclear capability is realistically employed.
—Arizona Republic, 25 April 1962

It could also refer to the possibility of acquiring nuclear weapons:

The Swiss electorate this weekend rejected by an overwhelming majority a Socialist proposal requiring approval by referendum of any Parliamentary decision to equip the Swiss Army with nuclear weapons.
—The Guardian (Manchester, England), 27 May 1963

By the mid-1960s, nuclear option had achieved fixed-phrase status and was in the news regarding NATO’s tactical weapons defense strategy in eastern Europe, Israel’s consideration of acquiring nuclear weapons, and discussions of their use in the Vietnam War.

By 1974, the phrase became de-weaponized, meaning “the option of using nuclear power”:

Citizens in Rhode Island, disturbed over the cavalier responses of utilities operating nuclear plants in nearby Massachusetts and planning future “nukes” in Rhode Island, are pleading with their senator to take a new look at this nuclear option and its vulnerabilities.
—The Tennessean (Nashville, TN), 19 November 1974

Dr. Norman C. Rasmussen, professor of nuclear engineering at the Massachusetts Institute of Technology, will speak on “Electric Power – The Nuclear Option” on Wednesday in the Gettysburg College Union ballroom.
—The Gettysburg Times, 26 April 1975

It wasn’t until 2003, when rules changes were discussed in the Senate about how to break the paralyzing tactic known as the filibuster, that a figurative use of nuclear option began to be applied to the reduction of votes needed to bring an end to debate (known as cloture) to a simple majority of 51, thus ending the minority party’s ability to prevent votes from taking place. A dictionary definition for nuclear option in this decidedly un-self-explanatory meaning might read as follows:

nuclear option noun : a parliamentary procedure by which the requirement of the affirmative votes of a supermajority of senators is changed to require only a simple majority to invoke cloture in order to stop a filibuster and allow a vote on a matter (as a nomination) to proceed

Given its frequent and established use, this phrase is likely to be included sometime soon in our dictionaries.