It's a pretty metal development.

Metal is moving into new territory, as of late:

this scene was so metal he's like a 6'2 brick house and he's backing away like wounded animal from HER pic.twitter.com/Mz208gQq89

Almost forgot to tweet about this but yesterday when I got home for lunch I saw a hawk take off from my lawn into a tree taking a squirrel with it to eat. It was so metal

Metal has been a noun in good standing since the 13th century, and has been used attributively for most of that time, but as these examples show, these days it's acting like a full-on adjective. And you can place the blame squarely on that musical scapegoat that's been blamed for decades with arguably worse things like driving youth to devil worship: heavy metal. 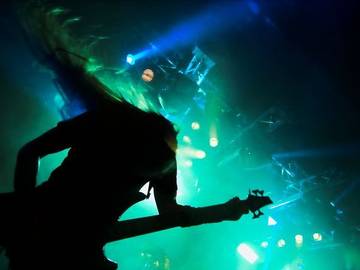 The only word you see, you know it's gonna be, The Adjective 'Metal'

That right: this use of metal is the unruly teenage offspring of the term heavy metal, which of course refers, as your hopelessly academic-sounding dictionary asserts, to "energetic and highly amplified electronic rock music having a hard beat."

The use looks like it dates to around the turn of the current century:

This show features Keelhaul, Premonitions of War, Amongst the Storm, Rune, Kalibas, Crushefekt, Gerilla Warfare, Summer Dying, Detonate, Kingpin, Downcyde, the Reefer Hut, Somnus, King Combine and other bands with names that are so metal one is hard-pressed to figure out what they say or mean.
— compiled by Aaron Beck and Jerry Dannemiller, The Columbus (Ohio) Dispatch, 31 Oct. 2002

And as in the earliest example we've uncovered so far, users sometimes explicitly play with the literal meaning of metal:

The New York band certainly doesn't shy away from the metal label—the word appears five times in the first paragraph of the latest Anthrax press release. And there's no mistaking its new album, "Volume 8: The Threat is Real" (Ignition Records), for a Pearl Jam record. It's so metal it clangs when you drop it on your CD tray.
— Mark Harden, The Denver Post, 20 Aug. 1998

As for heavy metal, the genre dates to the late 1960s, but the term had an earlier incarnation, coined in the mid-19th century, as a term for a metal of high specific gravity—that is, an especially dense metal. Noah Webster defined a different kind of heavy metal in his 1828 An American Dictionary of the English Language: "Heavy metal, in military affairs, signifies large guns, carrying balls of a large size, or it is applied to large balls themselves." Pretty metal.