We're considering matriculating this one down to the goal

Sometimes a single person can matriculate a word into entirely new territory.

Ok, that's not quite fair. The word matriculate isn't actually used like that—yet. But it is sometimes used like this:

"Let's matriculate the ball down the field ..."
Go #Chiefs! pic.twitter.com/Dj2BENtBmX

Granted, he caught seven of those nine balls for 246 yards and two scores, so when the Saints did take shots to him, he made the most of them; but for the most part Thomas worked as a short and intermediate target to help Brees matriculate the ball downfield.
— Jared Dubin, Pro Football Weekly, 11 Jan. 2019

Moore was able to pick up the slack and matriculate the ball down the field, but it certainly would have been nice for the Chiefs to be able to lean on their run game a bit more. They really were not able to do so, and the back they had come to view as their most reliable over the past several weeks ended up making a game-changing play for the wrong team.
— Jared Dubin, CBS Sports (cbssports.com), 27 Oct. 2019

That's right: as anyone who watches professional football with any regularity knows, matriculate can be used to mean "to advance." The use is transitive, and the object of the verb is the ball itself: you want to matriculate the ball down the field so that you can score a goal. 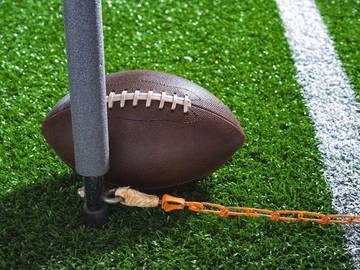 It's in the red zone (of dictionary acceptance).

It's a dramatic departure from the word's established meaning. In current non-football use matriculate is used mostly as an intransitive verb with the meaning "to be enrolled at a college or university," as in these examples:

Before matriculating I visited the school during a weekend when there weren't too many other "prefreshmen" on campus, so I was able to get more of a sense of how the Black community really was.
— Olukemi Adewole, quoted in Essence, Oct. 1993

Out of a record-high pool of 30,932 applications to Yale this year, 1,935 students were offered acceptance and 1,387 students have chosen to matriculate to the University …
— Rishabh Bhandari, Yale Daily News, 13 May 2014

Work joined Symphony in the Valley at the tender age of nine and continued to perform with them before matriculating at Juilliard.
— Beth Slater, Aspen Daily News, 9 May 2014

This meaning dates to at least the late 18th century. It was preceded by a now less common transitive use, which usually appears in the passive voice, and which dates to the 16th century: "to enroll (someone) as a member of a body and especially of a college or university," as in "She was matriculated in the local university."

The word's origin is the Medieval Latin word matriculare, which traces back to the Late Latin matricula, meaning "public roll."

So how did we get from enrolling in higher education to football? We have, it seems, one man to thank: Hank Stram.

Almost any time former Kansas City Chiefs coach Hank Stram wanders through an airport or hotel lobby, someone will walk up to him and say, "Hey coach, how about 65 toss power trap?" Or "Let's punch it in there, rats." Or "Let's matriculate the ball downfield." Those are phrases Stram used on the sideline at Tulane Stadium in New Orleans the afternoon his Chiefs beat the Minnesota Vikings in Super Bowl IV [in 1970]. Stram was wired with a microphone by NFL Films and his colorful stream-of-consciousness narrative is one reason the production still ranks as among the most popular of all the Super Bowl films.
— Leonard Shapiro, The Washington Post, 26 Jan. 1996

It was the first time a coach had been miked during the Super Bowl, and Hank Stram didn't disappoint. Stram's use didn't catch on immediately, however. The next example of the phrase "matriculate the ball" in a major news publication appears to be almost 20 years later, and in the context of, um, golf:

And working the ball is Elder's game. Making it spin and dance and hop about with backspin on the greens, snuggling it close to the hole. The boomers on the regular tour, the younger players, drive it to the edge of the world and then go chase it. Elder always preferred to matriculate the ball on down the fairway, out of trouble, and then feather it in there stiff. And because he was always a finesse player, his game has not had to yield to age.
— Bill Lyon, The Miami Herald, 18 May 1987

But the golf example is an anomaly. The current use of matriculate to mean "to advance (a ball)" is solidly associated with football, and with Hank Stram:

The Bears' four NFL championships in the 1940s, the three NFL titles for the Cleveland Browns and Detroit Lions in the 1950s, and the three Green Bay Packers titles in the early 1960s are not considered on the same level as the one Super Bowl won by the 1969 Kansas City Chiefs of coach Hank "Matriculate the Ball Down the Field" Stram.
— Richard Rothschild, The Chicago Tribune, 30 Jan. 2000

Make no mistake, the faux-erudite Stram could be creative with language, too. His entreaty to his Kansas City Chiefs players during their victory over Minnesota in Super Bowl IV, to keep "matriculating" the ball up the field, boys, is certainly one of the most unforgettable moments in the NFL Films archive. In truth, it is just a masterful bit of malapropism, since "matriculate" means to enroll at a school of higher education, not to advance a football.
— Len Pasquarelli, ESPN (espn.com), 16 July 2005

The injury made him a different quarterback…. He must be precise with his delivery, stepping toward his target, one stride if he's firing to the first read, two if it's the second and so on. He checks down more liberally and unleashes more feverishly. "To quote Hank Stram," Manning says, "I matriculate down the field."
— Lee Jenkins, Sports Illustrated, 23 Dec. 2013

Kansas City last won the Super Bowl 50 years ago. Remember Hank Stram yelling to matriculate the ball down the field? You might be too young to remember either. Whatever, this should be a great football game between the 14-4 Chiefs and the 15-3 Niners, between the imaginative grandfatherly Reid, 61, and the imaginative wunderkind Kyle Shanahan, 40.
— Peter King, [NBC Sports](https://sports.nbcsports.com/2020/01/20/after-two-incredible-playoff-wins-pat

It also, however, appears (and it seems increasingly so) without reference to Hank Stram:

It often maintains a playfulness, though, as its appearance in this jocular "Super Bowl Do's and Don'ts" demonstrates:

We of course do not know Hank Stram's thoughts about the word matriculate. It's possible he believed his use was a simple and logical extension of the established one. It's also possible he just liked how matriculate sounded and plunked it into a context he thought sounded good. We do feel like Stram would have approved of the license we exercised above, in writing about matriculating a word into new territory. We were, in fact, following his example. When Hank Stram was inducted into the Football Hall of Fame in 2003, his speech included the following:

As I matriculate my way down the field of life, I will never forget this moment and you wonderful people who helped make this day possible.

From your mouth to the dictionary's ear, Coach—amplified, of course, by substantial evidence of use in published, edited text.