Headcanon generally refers to ideas held by fans of series that are not explicitly supported by sanctioned text or other media. Fans maintain the ideas in their heads, outside of the accepted canon.

As books and movies are made into sequels and franchises, it can be fun to keep track of how characters grow and change, how their timelines intersect, who is related to whom, and all that. For all that is explained in a book or on a screen, there is often the urge to imagine aspects of beloved characters beyond what is seen or read. That’s part of being a fan. Fan lore encourages us to read deeply and analyze even the smallest detail of every character, and sometimes make up what we don’t know, all as a way to celebrate our love for the characters with other fans.

As part of this kind of intense fandom, one learns the distinction between what is canon and what is headcanon. 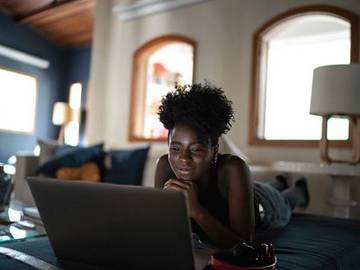 Just try to keep it down. The show's on.

The Origin of 'Canon'

The two terms are separated by about 900 years of use. Canon originated in the church, dating from before the 12th century. In its earliest English use, the term referred to a regulation or dogma decreed by a church council.

Other canons expressly forbade clergymen to party, frequent taverns and inns, and play dice (medieval people loved games of chance). It was made clear that clergymen should never attempt to imitate laymen in any way. They also could not live, breathe, or die like laymen. They were special and distinct from the rest of the population. They had been ordained.
— Joëlle Rollo-Koster, The Providence Journal, 15 Aug. 2019

The Church of England has dropped a centuries-old requirement for all churches to hold weekly Sunday services. Its general synod, meeting in London this week, formally approved a change to canon law to relax the requirement for morning and evening prayer in every parish church every Sunday.
— Harriet Sherwood, The Guardian, 21 Feb. 2019

Also in contexts of religion, canon refers to the texts that religious authorities accept and regard as scripture.

As centuries passed, angels' biblical roles moved beyond their responsibilities as messengers, and angels of judgment and angels of death began to appear. Later authors of ancient texts that are not part of the canon began to expand on the idea of the fallen angels introduced in Genesis.
— Tim Townsend, The St. Louis Post-Dispatch, 10 Dec. 2011

"This holiday [Hanukkah] is rabbinically ordained, meaning it was established by rabbis," [Rabbi Arthur] Lavinsky said. "Interestingly, it is found in the Book of Maccabees in the Christian Bible, but not in the Jewish canon," he said.
— Maria Polletta, The Arizona Republic, 15 Dec. 2016

In literary studies, the meaning of canon has broadened to encompass the works of a writer or any group of writings considered as sanctioned or accepted within a circle. The books and writers that are considered as belonging to the canon are almost always the subject of argument and tend to change with the times. In The Western Canon (1994), for example, the literary critic Howard Bloom identified 26 writers that he felt were central to western intellectual and artistic thought, from William Shakespeare to Samuel Beckett and including writers such as Jane Austen, Miguel de Cervantes, and Franz Kafka.

A notion behind canon is that conversations about literature rely on shared reading experiences—so long as everyone reads the same books, readers will know they are talking about the same ideas. Naturally, this use of canon extended to fan circles, referring not just to the books and movies that concern the same group of characters, but to the narrative universe that exists inside those works.

While non-aficionados may have heard of the likes of Spider-Man, The X-Men and The Hulk, Daredevil is a lesser-known crime fighter from the Marvel canon.
— Darryl Webber, The Essex Chronicle, 14 Feb. 2003

The idea of canon as a term for what is codified by a text is often attributed to Ronald A. Knox, an English Catholic priest who, in addition to his writings on Christianity, wrote detective fiction and contributed many writings of literary analysis on Sherlock Holmes. However, there is no evidence that Knox himself used the term. Arthur Conan Doyle’s Holmes stories, published in periodicals, encouraged analysis of the works as a canonical universe because they offered reliably consistent information about the characters across different episodic arcs.

As fans of the detective later wrote their own stories, canon became a useful term for distinguishing the information that Conan Doyle provided in the stories from that which was inserted by someone else into the Holmes universe.

From 'Canon' to 'Headcanon'

Since the idea of canon is critical to fan lore, it’s understandable that a distinguishing term has emerged for those ideas we have about a character that is not supported by the text or film in which the character appears. And so we have headcanon.

Even though James and Lily were married, some fans suspected that Harry's biology was not that simple. Given the amount of history between James, Lily, and Snape, many headcanons suggest that James is not Harry's father, but Snape is due to an affair Lily and Snape had.
— Lindsay Press, Screen Rant, 29 Oct. 2015

And then there are the things that will always be our headcanon whether they happen or not, like Finn and Poe’s love in Star Wars and countless other non-heterosexual relationships—things that tend to upend the conversation on accepted canon and demand more than just unofficial hints and extratextual confirmations, as they well should.
— Dan Van Winkle, The Mary Sue, 26 Mar. 2018

There are a lot of competing interpretations of the reality or otherwise of Fleck's story as his grip on the world loosens. These are the most popular, though given how hard it is to say what actually happened, you're completely at liberty to bodge together your own headcanon from the bits you like of each. Joker might be the first ever choose-your-own-adventure blockbuster.
— Tom Nicholson, _Esquire_ (UK), 10 Aug. 2019

As an autistic writer who spends a lot of time online, I find the act of forming and discussing autistic headcanons to be a fascinating look into the way that autistic people can use pop culture to better understand ourselves and the world around us. What I find most interesting, though, is how little overlap there is between the characters that are ostensibly created in our image by others, and the characters that we choose for ourselves.
— Sarah Kurchak, Pacific Standard, 22 Feb. 2018

Headcanon refers to something that a fan imagines to be true about a character even though no information supporting that belief is spelled out in the text. Sometimes that involves filling in your own explanation for a character’s strange motivation, or projecting aspects onto a character that make them more relatable to you. If you choose to believe, for example, that the Federation vessels in Star Trek malfunction so frequently due to Federation engineers simply being overmatched by the technology; or that Dumbledore and the Weasleys are evil conspirators, then you’ve created a headcanon—essentially, a canon that exists only in your head.

The term headcanon is purported to have originated among memes shared on Livejournal and fan blogs around 2007. This kind of deep immersion into fictional universes—and the desire to keep spending time with characters after all the books have been read and movies have been watched—is also manifested in fan fiction, in which fans create whole fictional narratives based on another writers’ characters. Another term, fanon (a portmanteau of fan and canon) applies when someone’s headcanon is shared with and becomes widely accepted by members of a fan community.