What it means, where it comes from, and how to say it

Antifa. Hmm. How do you say that? English precedent for words ending in fa is largely limited to alfalfa (and, if you squint, loofah), so it's no surprise that people don't quite know how to pronounce the word. Currently two English pronunciations appear to be gaining widespread use: \an-ˈtē-fə\ (an-TEE-fuh), and \ˈan-tē-ˌfä\ (AN-tee-fah). 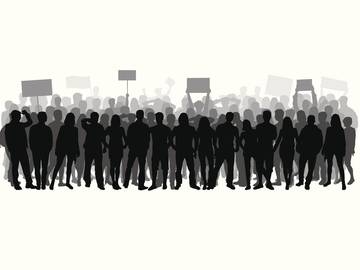 The term was first proposed for dictionary entry in 1955, but wasn't common enough at the time.

Antifa can be understood as a shortened form of the word anti-fascist, and like that word, it's both an adjective and a noun. The adjectival use is straightforward ("antifa protestors/groups" are protestors/groups opposed to fascism), but the noun use is more complex. Antifa the noun can refer to:

Antifa is the backlash to the backlash, a defensive response to the growing presence of right-wing extremism.
— Todd Gitlin, The New York Times, 28 Aug. 2017

a particular group of anti-fascists:

After [World War II], Antifas varied in size and composition across the former Reich, now divided into four zones of occupation, and developed in interaction with the local occupying power.
— Loren Balhorn, Jacobin, 8 May 2017

or to anti-fascists generally:

Berkeley—a hotbed of activism of on both sides of the political divide since the 1960s—has been the scene of much of Antifa’s activities over the last year.
— Andrew O'Reilly, Fox News (foxnews.com), 30 Aug. 2017

The term isn't new. In fact, it was first proposed for entry by one of our lexicographers in 1955, but it wasn't common enough at the time to justify its inclusion. Times, of course, have changed, and the word is now a very good candidate for entry, as the examples above demonstrate.

Our English word antifa is a German borrowing, but the word's story starts in Italy. The fa of antifa has its roots in the Italian word fascio (plural fasci), a word that means literally "bundle," and figuratively "group"; as early as 1914, Italians were using a derivative of fascio, fascisti, to refer to members of a political fascio. The fascisti adopted as their emblem an insignia of official authority in ancient Rome with a linguistically very appropriate name: the bundle of rods with an ax head projecting up from it known as the fasces. By 1919, the word fascisti had as its referent the black-shirted members of Benito Mussolini's "combat groups" in particular.

Fascisti was borrowed directly into English, along with an opposing term, anti-Fascisti:

After some minutes the negotiations were resumed, and the Fascisti promised to leave the town by a special train, but while waiting for the train to be drawn up the majority set out on a punitive expedition against neighbouring peasants who were known to belong to the Arditi del Popolo [the anti-Fascisti].
—The Times (London), 23 Jul. 1921

I beg to inform you, that on March 18, 1923, we held an anti-Fascisti meeting at the Amalgamated Temple in Brooklyn. This meeting was filled with 2,000 Italian trade unionists. We took up a voluntary contribution to relieve the victims of the Fascisti outrages.
— letter to the editor, The Nation, 25 Apr. 1923

Anglicized versions of both words, however, soon became dominant:

Violent scenes took place this morning in the vicinity of St. Jean Church between numerous anti-Fascists and Italian and French Communists who attacked members of the Nice Fascist section who assembled at the church for a Requiem Mass in memory of Signor Bonservizi, the Paris Fascist leader who was killed in a cafe in Paris.
— The Daily Mail (London, UK), 22 Apr. 1924

Meanwhile in Germany, opposition to Hitler's fascist movement was driving its own vocabulary. Germans borrowed the Italian fascistico/fascista to form the adjective faschistisch and the noun Faschist, and then to form antifaschistisch or Antifaschist, which were then clipped to antifa/Antifa. In an Associated Press article with a dateline of Dresden, Germany, October 19, 1930, we find what is currently our earliest evidence of antifa in English:

Military practice by the local Communist Antifascist Society was broken up last night by police near the suburb of Heidemuehle. All members of the society, which is known as Antifa, were arrested and police are investigating purposes of the military practice, which they had suspected for a long time was taking place.
— The Daily Boston Globe, 20 Oct. 1930

In this example, antifa refers to a particular anti-fascist group, one by the name of the "Communist Antifascist Society." If a society by that exact name did indeed exist, however, evidence of it is not easily found in the historical record, either in English or in its German translation. And the term antifa is most often traced to a German anti-fascist group of a different name: Antifaschistische Aktion. Antifa was (and is) a nickname for that group, as well as other anti-fascist groups, but the word antifa appears to predate the organization itself: the 1930 evidence of the term above is almost two years before the apparent June 1932 date of that group's first meeting.

Antifa continued to be used during and after World War II, but in 20th century English language publications it was a distant competitor to anti-fascist. In the 21st century it appears to be finding a place of its own.