'Dad' is tinkering around with a new use.

The word dad is a 16th century development, presumably literally from the mouths of babes. (Perhaps you've noticed that fad among the wee set in which they all refer to their fathers as "dada"? It's not new.) 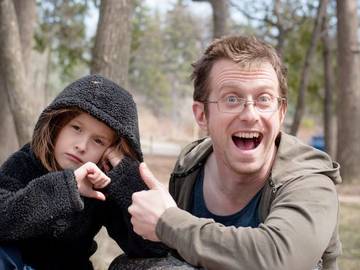 Dads being people and all, the word dad is a noun. But in the late 20th century dad started showing some signs of moving into adjective territory, immediately preceding other nouns. We're all now very familiar with groan-inducing dad jokes, goofily awkward dad dancing, unfashionable (or so unfashionable they're fashionable) dad hats and dad jeans. And of course there are the not-new but newly-named dad bods. But just because these instances of dad immediately precede nouns doesn't make them adjectival uses.

Nouns do the adjective-like job of modifying other nouns—that is, limiting or specifying the other noun's meaning—all the time in phrases like apartment building and apple tree—and are still considered nouns. It's when they start to be used with adverbs like more and less and totally and so, and when they develop comparative and superlative forms, that we consider them as having taken on true adjective functions.

Dad seems to be doing just this:

This is the dad-est thing that has ever happened https://t.co/vmN8JFZI0i

Cool cloudy weather made me wear my daddest of flannel dad shirts today. Ready to grumble about things and listen to @cartalk in the garage.

Not surprisingly, mom isn't far behind:

A hand mixer from Kohl’s. The mommest purchase in the world.

We're not quite ready to adopt either into our dictionaries yet, but we're always happy to see evidence that the lexical family is getting bigger.