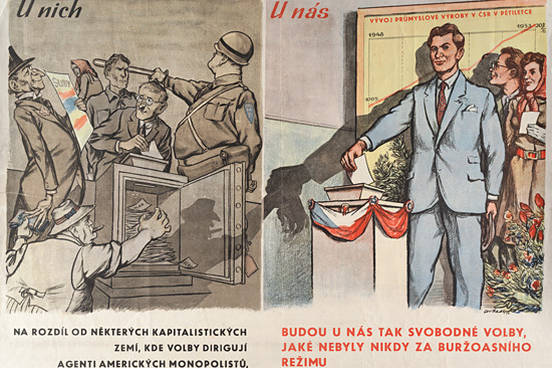 A poster by Lev Haas (1954). "There: elections are directed by monopolistic American agents; Here: free elections such as never before during the bourgeois regime"

Agitprop is a curious sort of portmanteau, blending parts of two words, each from a different language. It comes from the Russian word agitatsiya (“agitation”) and the English propaganda (“the spreading of ideas, information, or rumor for the purpose of helping or injuring an institution, a cause, or a person”). An agitprop agent is called an agitpropist.

Chris Hedges, a former reporter for The New York Times who now blogs at TruthDig.com, accused him of making a work of “agitprop for the security and surveillance state,” intended to marginalize WikiLeaks and Mr. Assange.
—David Carr, The New York Times, 6 Oct. 2013 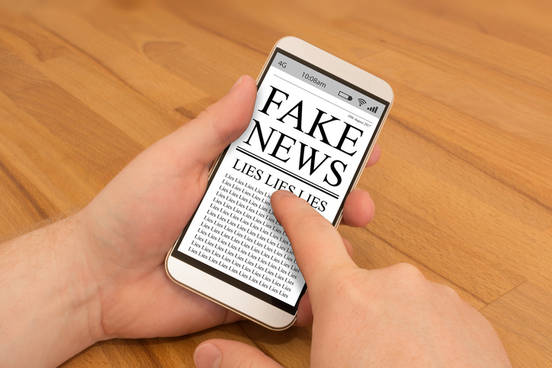 Definition: false information deliberately and often covertly spread (as by the planting of rumors) in order to influence public opinion or obscure the truth

Disinformation does not much look like a word of Russian origin, but it is believed by many to be a literal translation of that language’s dezinformatsiya (“misinformation”). Although the word may be found in occasional use as far back as the 1930s, it began to see greatly increased use during the Cold War, in the 1950s.

Petrov, who himself is a former agent of the Russian secret police, gave testimony at the resumed inquiry of the Royal Commission on Espionage in Melbourne. He described six intelligence directorates and a department responsible for the “dissemination of misleading information,” known as the Disinformation Section.
–The Irish Times, 1 Jul 1954 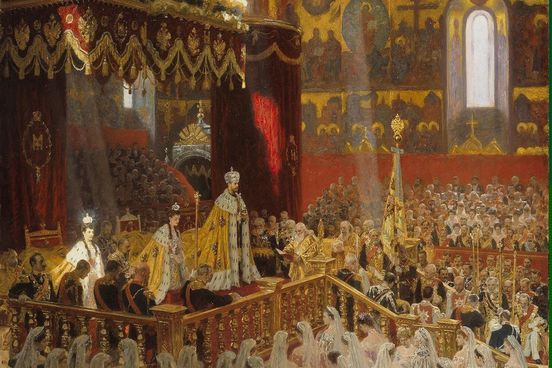 Definition: one having great power or authority

The original meaning of czar (also found occasionally as tsar) was “an emperor or king,” especially the ruler of Russia up until the 1917 revolution. The Russian forms of the word come from the Old Russian tsĭsarĭ (“emperor”). In the middle of the 19th century the word took on a new meaning, referring to any person, not related to Russian matters, who had great power or influence in some sphere.

He was a powerful political leader, and was known as “the Czar of Pennsylvania Politics.”
—The Daily Illinois State Journal (Springfield, IL), 22 Jun. 1889 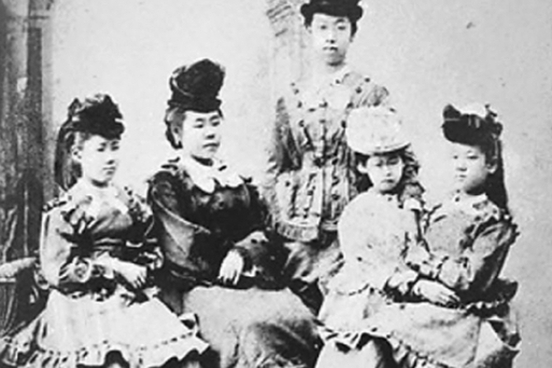 Five Japanese exchange students in Chicago, 1871. Though 'intelligentsia' entered English as a word almost exclusively applied to Russians, it was later applied to intellectuals from any country.

Definition: intellectuals who form an artistic, social, or political vanguard or elite

When intelligentsia first began being used in English (in the late 19th century) it was almost always applied to Russians. Our language borrowed it from the Russian intelligentsiya; Russian in turn had taken it from the Latin word for “intelligence” (intelligentia). By the early 20th century the word had shed much of its distinct nationalism, and began to be applied to intellectuals without particular regard to borders.

Since the female gymnasia have been instituted, however, the great majority of Russian girls of the “intelligencia” are receiving in them the same education as is given to the boys in the male gymnasia, preparatory to their entering one of the great universities.
—San Francisco Chronicle, 20 Oct. 1889 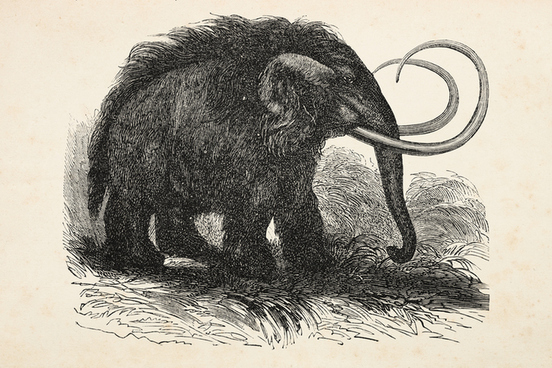 Definition: something immense of its kind

Mammoth came into English in the early 17th century, as a name for any of a number of elephantine mammals; our language took it from the Russian word for these beasts, mamont. By the beginning of the 19th century the word had undergone a functional shift, taking on a new role as an adjective, with the meaning of “of very great size.”

Yet, after all this, after the senate had gained all that avarice itself could have desired, and after the companies had given up from despair, the house of representatives rejected the bill altogether—not after a discussion of its merits, not because it was an act unworthy of the state, but because one or two county members got up and positively asserted that it was impossible to make such canals! that the whole was speculation! that the bill was a mammoth one! that the printing of it cost a great deal!
—Weekly Aurora (Aurora, PA), 11 Sept. 1810 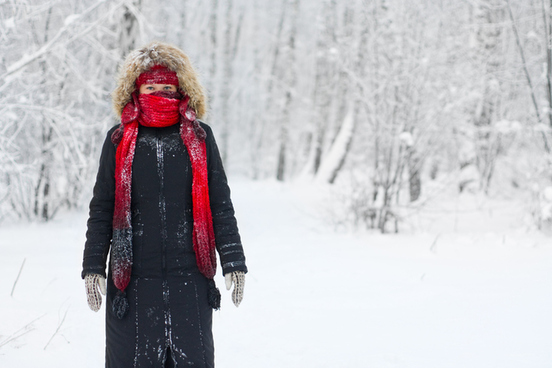 Parka comes ultimately from Nenets, a Samoyedic language of Russia. In Nenets the word meant “skin coat,” as the people who lived in the Arctic referred to jackets made thusly from animals. It is one of the older English words that have been borrowed from this part of the world, with use dating to the early 17th century.

Their garments are all of Fur; that next their bodies (called by them Mallek, or a shirt) of young Fawns, Hares, or Swans-skins, very soft and well-dressed; the outward (called Parka) of stronger and thicker Fur.
—Moses Pitt, The English Atlas, 1680 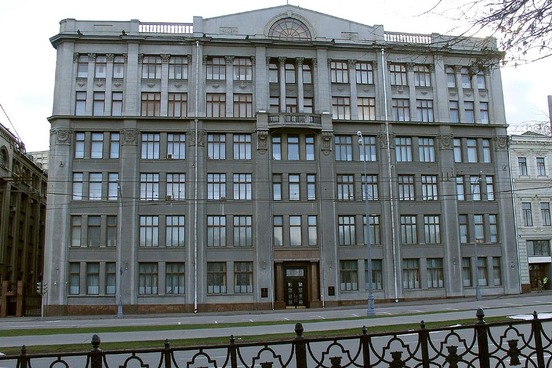 Definition: the principal policy-making and executive committee of a Communist party

Politburo comes from the Russian politbyuro, which in turn is from politicheskoe byuro (“political bureau”). In use in English since the early 1920s, the word has primarily been used as a title for the executive committee of the Communist party in Russia. However, the word may occasionally be found used in a somewhat figurative sense; a 2016 article in the Glasgow newspaper The Herald, writing of the Labour party in the UK, said that they might be “left with a shadow cabinet, a sort of politburo of seven.”

At a meeting of the Politbureau recently a proposal to abolish private trading and seize 50 per cent. of the goods in the market and shops was defeated only by two votes.
—Daily Mail (London, England), 7 Nov. 1922 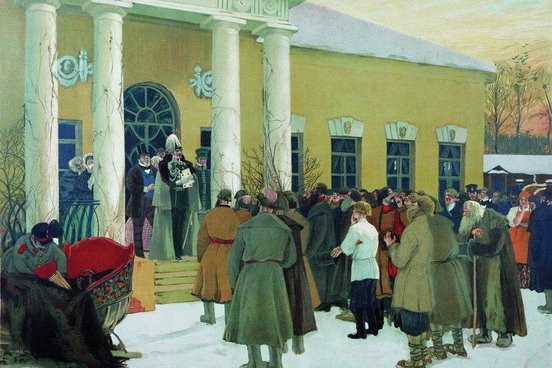 Ukase was adopted into English from two languages almost simultaneously, the French ukase and the Russian ukaz. In Russian the word can be traced back to ukazat’, meaning “to show” or “to order.” The earliest use of the word in English in reference to “a proclamation by a Russian emperor or government, having the force of law,” beginning in the early 18th century. By the next century the word had taken on the general sense of “edict” (”the proclamation of a law or rule of conduct made by competent authority”).

Is it true that there is great excitement in Russia because the Czar has issued a ukase declaring whiskers contraband, owing to the fact that Germans are shaving Russian prisoners and using their whiskers as a substitute for cotton?
—Christensen’s Ragtime Review, Oct. 1915 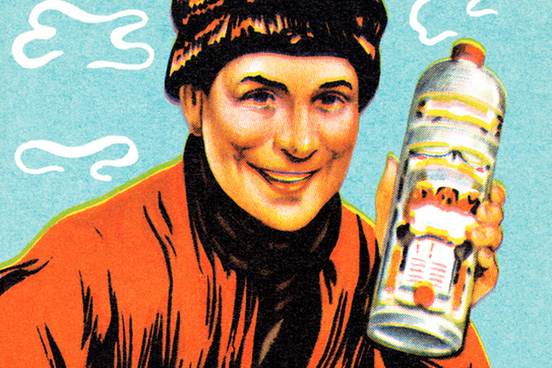 Definition: a colorless liquor of neutral spirits distilled from a mash (as of rye or wheat)

Kabak in the Russian language signifies a public house for the common people to drink vodka (a sort of brandy) in.
—Johann Gottlieb Georgi, Russia: or, a Compleat Historical Account of all the Nations Which Compose that Empire, 1780 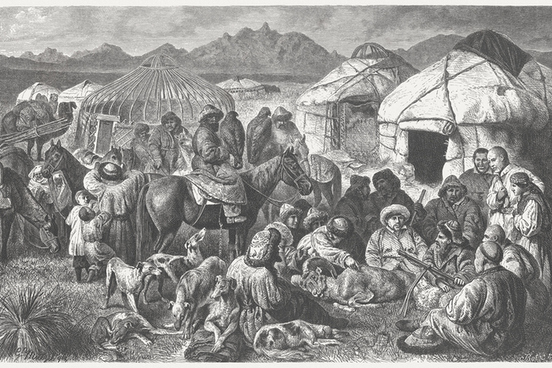 Definition: a circular domed tent of skins or felt stretched over a collapsible lattice framework and used by pastoral peoples of inner Asia

Yurt comes from a Russian dialect word, yurta, of Turkic origin; akin to the Turkish yurt, home. The word has been in English use for well over a hundred years now, and some people are of the opinion that these simple dwellings are increasing in popularity. The yurt is ready for its close-up.

Robust and versatile, the yurt has evolved into the ultimate portable dwelling. These virtues have been recognised in the west and now we find yurts used for many purposes — offices, summer houses, meditation spaces, spare rooms, or just satisfying spaces to be in.
—Paul King, The Complete Yurt Handbook, 2002