Going to the beach? Impress your companions with these little-known beachy words

So you’re going to the beach. This is, we have been informed, a perfectly agreeable way to spend one’s summer vacation. The beach is also, however, a place where not very much happens. If you have no dog-eared paperback that you have been planning to read, and do not care to bake in the sun while pondering the riddle of our existence, here's a parcel of words with which you may amuse—or confuse—yourself. 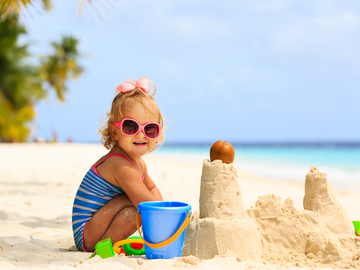 'Fluctisonant' is a rare word for "sounding or roaring like waves." It's little used today, which is a shame.

Words for the Beach

Would you like to refer to your upcoming episode of sunburn and sand-sticking-in-unwelcome-places by another word? Inform people that you will be visiting the plage (“the beach of a seaside resort”), a lido (“a fashionable beach resort”), or the praya (“beach, strand, waterfront”).

While you sit at the beach trying to not think of what is happening at your place of employment, amuse yourself by playing the game “what’s the word for that?” Our language is awash with words for things that most people never really thought about, until they were forced to spend the better part of a day huddled under an oversized umbrella. We have words for “small waves” (ripple and riffle), and we also have an adjective, decuman, for describing a large wave.

The sea spray that blows off the ocean is called the spindrift, a word that can also be used to describe sand or snow that is blown by the wind, and the rush of water from a breaking wave that comes onto the beach is referred to as a swash. Swash may also refer to the sound made by these waves as they break upon the shore.

Lexicographers in the 17th century defined a great number of fanciful and fantastic words having to do with waves. Thomas Blount, in his 1656 Glossographia, and Elisha Coles, in his 1676 An English Dictionary, each included the words undisonant and fluctisonant, both of which mean “sounding or roaring like waves." Sadly, these specimens—and others such as fluctivagant, “tossed by the waves”—are little used today, and tend to be found primarily in historical dictionaries.

If you are actually one of those people who enjoys all things beachy and plans on basking in the sun, you might already know that you are a heliophile (“one attracted or adapted to sunlight”). And yes, there is a word for the rest of us, those for whom the idea of a day at a warm sunny beach elicits a cold sweat: we are heliophobes.