'Party': A Word for One or Many

Reader, you are the party we are in search of. 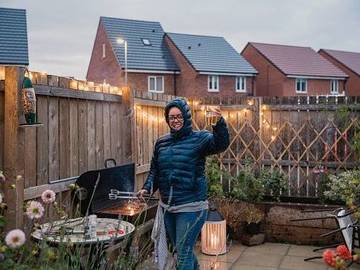 Pictured: a party of one, bringing the party.

People have been partying since the dawn of time, but it took quite a while for the noun party, referring to a social gathering, to join the English language, and much longer for the related verb (it's a 20th-century Americanism). Originally, the noun meant "a part of a whole," or "a division, portion, or share." "The fourthe party of this day is goon," wrote medieval author Geoffrey Chaucer in the "The Man of Lawes Prologe" of The Canterbury Tales. The word is a Middle-English borrowing of Anglo-French partie, a noun derived from the verb partir, meaning "to divide." This sense of party fell into disuse in English toward the end of the 17th century, but party is still living it up—and in senses dating back to its beginnings.

Earliest Use of 'Party'

Earliest senses are still found in law books today referring to a part—an individual or a group—constituting one of the sides of a proceeding, transaction, or agreement. If one stops to think about it, the notion of a "party" being a single person might strike one as a bit odd, given that the word is most often used for a gathering of people, not "a party of one." However, it has been used in both ways, in and outside the courts, for centuries—and no one thinks twice about the sole party.

The term party in interest is one common, at least in law, example of singular party. It refers to a person whose rights have been or might be (after final judgment) affected by a legal action, which often concerns the party's pecuniary interests, carried out especially by a government or judicial body.

Legal experts … don't believe the fact that the case as brought in the campaign's name would necessarily shield Trump himself from discovery, since he's the person in charge of the campaign, a likely fact witness and the real party in interest in terms of alleged damages.
— Erik Wemple, The Washington Post, 5 Mar. 2020

Another word for "a party of one" is third party, which names a person who is not one of the two main people involved in a legal agreement but who is still affected by it in some way.

By the late 14th century, the legal party sense referring to an individual was extended to a participant in any kind of action or affair.

IAGO: Gentlemen all, I do suspect this Trash / To be a party in this injury.
— William Shakespeare, Othello, ca. 1604

A little less than a century later, party begins being used in a jocular manner for a specific person, especially to a person who has reached a certain age.

The girls [the Brontë sisters] were neither mad nor bad nor particularly dangerous to know. Their father, Patrick, was a kind and genial parent; their brother, Branwell, was a talented and resourceful writer; Aunt Elizabeth Branwell was not the ferocious and dogmatic Methodist of myth but a rather flighty old party of advanced views.
— Peter Ackroyd, The New Yorker, 11 Sept. 1995

By the 17th century, party becomes a generic word for "person."

For, to yourself, what you do know, you must, / And cannot say you dare not. Good Camillo, / Your chang'd complexions are to me a mirror / Which shows me mine chang'd too; for I must be / A party in this alteration, finding / Myself thus alter'd with't.
— William Shakespeare, The Winter's Tale, 1610-11

A more recent "party of one" arrived with the 19th-century invention of the telephone when party came to be the name for the user of a telephone, especially one connected to a party line (or party wire), which was a single telephone circuit connecting two or more subscribers (people who owned early telephones) with the exchange (a central office in which telephone lines were once connected). "Your party is on the line" was a common line heard from an operator.

The single party aside, the word is most often celebrated in its signification of a group. Early on, party came to denote a group of people forming one side of a legal case or a contest, battle, etc., as well as to a group united in opinion or action in opposition to others. Additionally, it came to name a detachment of military personnel and a group engaged in the same activity, as in "search party" or "hunting party." In the 17th century, the familiar sense referring to political parties took form: "a group of persons usually sharing a set of political ideals who are organized for the purpose of directing the policies of a government."

About the beginning of the 18th century, English double-dipped and borrowed the French partie, a word for a social gathering for pleasure (as well as for a part of a whole). This word is the source of our social party, which takes part in the names of countless gatherings for entertainment, amusement, or pleasure: "birthday party," "block party," "cocktail party," "dinner party," "house party," "keg party"—the parties go on with parties featuring the presentation and/or demonstration of articles for sale (e.g., a makeup party or a Tupperware party).