Why 'Love' Means "Nothing"

In tennis, love is a word that represents a score of zero, and has been used as such since the late 1800s. It's not perfectly clear how this usage of love came to be, but the most accepted theory is that those with zero points were still playing for the "love of the game" despite their losing score.

A word on the history of love as a word for a strong feeling of affection: complicated. So please excuse our shying away from matters of the heart to engage in a different love affair—a courtly one. It will not be dragged out; we are only investigating love meaning "nothing." We will present a volley of theories about this sense of love, starting of course at "love-all" (which tennis players and spectators know to mean that neither side has an advantage—it is 0 - 0 to begin) and you, readers, can be the judge. 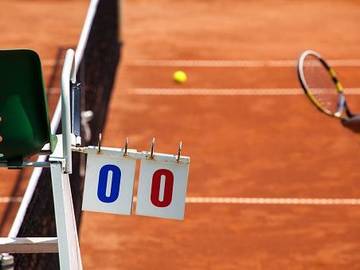 We do this for love of the game.

Love as a word for a score of zero has been used in the sport of tennis since the late 1800s. Frankly, how love became a word for zero is baffling, but so is the overall scoring system for tennis. The points progress from love to 15, 30, and 40, which are relatively equivalent to 0,1, 2, and 3 in points per game. For example, if the player serving wins the first point of a game, then the score is "15 - love" or "fifteen (to) love" in their favor. Etymologists aren't exactly sure how love came to mean "zero," but, as we said, there are theories. (As for the point system, we're still scratching our heads about the random 40; 15 to 30 begins a pattern that 40 doesn't follow.)

The first theory (like tennis' point system) doesn't add up; however, it is a popular one and it makes for an attractive story. It has been suggested that the "tennis" sense of love is derived from French l'œuf (the vowel in this French word has no English equivalent, but approximations would be something like "LERFF" or "LUFF"); œuf means "egg." It is said that when the game was imported into France from England, the French used the word l'œuf to mean "zero," due to the resemblance of an egg to the written figure 0—just as a score of zero is sometimes called a "goose egg" in American English or a "duck/duck's egg" in British (all of those terms hatched before tennis' usage of love). English players mispronouncing the French word supposedly influenced the change to love, and the rest is history, so to speak. But this turns out to be folk etymology: the problem is the lack of evidence of l'œuf being used in French to mean "zero." The French use zéro to mean "zero" or "naught," and un œuf ("an egg") and les œufs ("the eggs") for the food. This theory seems cooked.

Another, and far more accepted, theory is that this sense of love comes from the expression "to play for love." The idea is that a person who fails to make any points doesn't care because they are playing for love of the game, rather than playing to win (which, really, every player is trying to do but when you can't get it together at least show good sportsmanship and play for love) or playing for monetary stakes. In other words, playing on the court, challenging yourself, is the reason for still playing despite having the score of love. And to players of tennis, the sport can be truly a "labor of love," an expression which implies an undertaking performed out of love for the work itself without consideration of benefit or reward. A similar idea is found in the origin of the word amateur, which can refer to a person who does something strictly for love; the word comes from the Latin word amare, meaning "to love."

Win or lose, written records of playing a game "for love" date to the 1700s and early use is in card games. In 1742, for example, Edmond Hoyle, an 18th-century writer on British card games, recommends (for the game of whist): "If your Adversary is 6 or 7 Love, and you are to lead, your Business in that Case is to risk a Trick or two, in hopes of putting your Game upon an Equality.…"

We're calling that such earlier use breaks the "egg" theory but doesn't give points to the "for love" theory either; it only gives an idea of when love was first used in writing to mean "nothing" in sports and games. The physical act of playing out something to its end, for love or another emotion, has been experienced long before the invention of cards and rackets. It's only human to do so, and it seems that human nature might have compelled people to express their zero as love. Love, after all, even when it means "nothing," makes everyone feel better. But when did that first love get put in the "nothing" box?