Traditionally, wrestling is a sport in which unarmed individuals struggle hand-to-hand with each attempting to subdue his or her opponent. During the 19th century, the sport began to take shape as a form of spectacle or performance art, relying on showmanship for its appeal more so than physical exhibition of perseverance, strength, and strategy. Today, that genre of wrestling is known as "professional wrestling," which affects showy costumes and over-the-top behavior and showcases matches pitting a villain (called a "heel") against a good guy (called a "face" or "baby face") in an epic confrontation of good and evil.

The matches are (spoiler alert) scripted, and although fans of professional wrestling are aware of their predetermination, they, nevertheless, enjoy the melodrama and pantomime that unfolds in and outside of the ring between wrestlers. In the 1980s, wrestlers began using the code word kayfabe in reference to the staged performance presented as authentic as well as to the act of maintaining the fiction by staying in character. 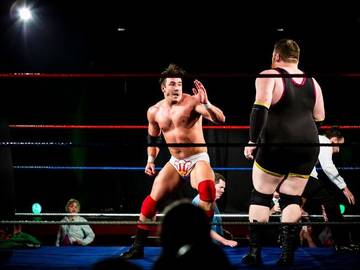 It wasn't long ago that kids watched Hulk Hogan in the ring, thinking a single body slam was all it would take to put Andre the Giant down for the count. There is even wrestling jargon for the illusion of competition: Those in the business believed keeping "kayfabe" was paramount to keeping fans hooked. But by the late 1980s, when some U.S. states were forcing the "sport" to adhere to regulations and tax rules, WWE (then the World Wrestling Federation) impresario Vince McMahon testified to state authorities in New Jersey that wrestling was indeed performance. Breaking kayfabe didn't kill the industry—rather it turned into a juggernaut. With any pretense of competition cast aside, World Wrestling Entertainment today is a publicly traded, multi-platform company with more than $650-million (U.S.) in revenue.
— Cliff Lee, The Globe and Mail (Canada), 13 Mar. 2017

Putting over a pro-wrestling persona is not easy. The task requires a thorough mastery of "kayfabe," a carny-derived term for the extreme strain of method acting peculiar to the sport. American pro wrestlers treat kayfabe with a devotion that requires denying the obvious. It's a head game. When you know you're faking and the audience knows you're faking and you know the audience knows you know you're faking because the fact that pro wrestling is fake has been documented, verified, and repeated to the point of cliché, and yet you stay in character on the walk from the locker room to your Mazda just in case someone is pointing his phone's camera at you from a window above the alley—that's kayfabe.
— Michael Brick, Harper's, May 2013

Although coined in the late 20th century, the origin story of kayfabe is uncertain. Some believe it is carny code for "be fake" (as mentioned in the above quote), whereas others consider it an alteration of "be fake" that was formed in a way similar to, but not in keeping with, pig Latin. That theory developed from the medial "-ay-." Pig Latin works by moving the initial consonant of a word to the end of it and adding "ay" or, if the word begins with a vowel sound, adding "ay" to the end without changing anything else—which doesn't support the formation of kayfabe. In pig Latin, "be fake" would be "ebay akefay."

Other suggestions of the word's origin are the Latin-based slang expression "to keep cave" (cavēre is a Latin imperative meaning "to take care" or "beware") and French-derived qui vive.

The term "keeping cave" … only rarely extends to boys who do not possess any Latin…. The look-out in a grammar school … may call just "Cave!" (pronounced kave or kay-ve).
— Iona Opie and Peter Mason Opie, The Lore and Language of Schoolchildren, 1959

Qui vive literally means "long live who?" and was used by sentries to test the allegiance of visitors; a proper response would be "Long live the king." In English, the phrase came to mean "alert" or "lookout" and is usually used in the expression "on the qui vive." In the end, etymologists have struggled to pin down the origin of kayfabe.

Kayfabe is also occasionally used, very loosely, as a verb to denote all kinds of trickery.

Over the years, wrestlers would not only use "kay fabe" in front of outsiders, but "kay fabe" each other about news that wasn't meant to be shared. My friend Gorilla Monsoon, the late World Wrestling Entertainment Hall of Famer, had a New Jersey license plate "K-Fabe" on his Lincoln Continental.
— Freddie Blassie, Listen, You Pencil Neck Geeks, 2003

I had to go to bed at 8 o'clock every night til I was like in eighth grade for God sakes. I kayfabed my radio into my room and put that little ear plug in my ear. I didn't have any cool things like Beats or anything. I had a little plug, and it went in one ear. So every night I listened to KMOX out of St. Louis and just prayed that there was a Cardinals' game on.
— Jim Ross, quoted in The Miami Herald, 3 Mar. 2016

In addition, it has recently been used to describe the act of illusion that takes place in other arenas, such as politics.

The lingua franca of the game is kayfabe—outrageous overstatement that is believed neither by the actors who recite it or by the audience that pretends to be moved by it. Big-time politics in this country is mostly professional wrestling, and most of us who pay attention to it are complicit.
— Philip Martin, The Arkansas Democrat-Gazette, 14 May 2017

Kayfabe originated pre-Internet—during a time when the secrets of professional wrestling could be kept under wraps. Today, there are no secrets but that hasn't made a difference in regard to spectatorship. And why should it? Sure it's fake, but real wrestling matches tend to be short and not very dynamic on camera. What the fans expect is an entertaining performance as well as an escape from reality, and perhaps this acceptance will help to establish kayfabe outside of the ring.