What exclamation might you make when you pick up a toddler who has fallen down on their derriere—or somehow fallen over while already sitting down? Perhaps, the seemingly nonsensical term upsy-daisy might cross your lips, or up-a-daisy, or ups-a-daisy? Or do you prefer variants based on interjections like oops or whoops, such as oopsie-daisy or whoopsie-daisy? 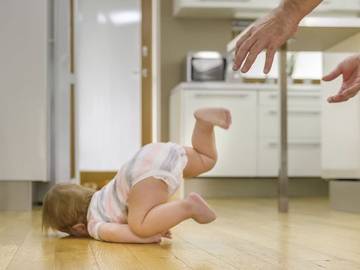 Not to mention the classic 'whoopsie-doodle.'

All of these are used to give reassurance or to give acknowledgment that something out of the ordinary is about to happen (like being lifted high into the air after said fall or stumble). Their cutesy pronunciations usually distract just enough to prevent an emotional breakdown, and although typical usage of these terms is with children, they do apply to adult mishaps as well.

Whoopsie daisy: Making an extravagant entrance the star seemed to almost trip as he stepped onto the deck, possibly causing the subsequent hilarity.
— Jessica Rach and Julia Pritchard, The Daily Mail (UK), 4 Sept. 2016

As with many such exclamations that are more often used in speech than print, people often tend to hear and say it differently, making it problematically interesting to put in writing. And then once the utterance has been decided upon, there's of course the issue regarding spelling it in hyphenated, closed, or open form. The up, oops, and whoops variants (with or without a middle "a" and with either a "-y" or "-ie") are all found in print. Some examples are upsidaisy, upsa daesy, upsie-daisy, oops-a-daisy, oopsy-daisy, hoops-a-daisy, and whoops-a-daisy.

"Okay, now hang on to me. Upsa-daisy," he said as he lifted her to her feet and steadied her with his hands on her waist.
— Karen Harper, Shattered Secrets, 2014

I got a hen down and literally raked it toward the door. It was scared of me and stuck its head between the waterer and the wall. This gave me the opportunity to lean my torso inside the door and grab the hen by the leg. Upsy daisy! I lifted it out and away from the curious nose of the dog….
— John McCright, The Addison County (Vermont) Independent, 19 July 2018

The source word is 18th-century up-a-daisy, itself from dialectal upaday. The variants with oops and whoops are believed to have led to those words becoming standard interjections in their own right.

An early written record of the exclamation is in the form up a-dazy in English satirist Jonathan Swift's 1711 Journal to Stella.

Come, stand away, let me rise: Patrick take away the candle. Is there a good fire!—So—up adazy. At night.—Mr. Harley did not sit down till six….

Other 18th-century writers began to transcribe it as up-a-daisy, and subsequent writers played around with phonetic spellings, including upsa daesy in the 19th century as well as the hyphenated and closed spelling upsidaisy. The hyphenated form upsi-daisy was defined in a 1888 glossary of words "used in the neighbourhood of Sheffield" thusly:

UPSI-DAISY, an interjectional remark addressed to children when they fall down. "A man who sold bootlaces in Sheffield was called 'Opsi-daisy.' A drunken man, being found by his wife lying on his back in a gutter, was thus addressed by her: 'Eh!—art tha lookin' for daisies upards?'"

Although the exclamations seem nonsensical, there is lexical logic behind their origins. The formations with the adverb up are straightforward since the expression originated in the act of raising or lifting up. And it seems probable that the whoops and oops forms developed from dialect pronunciation or misinterpretation of up. The dazy/day/daisy element is where we have to lean on hypothesis. Quite possibly, it could have been influenced by 17th-century lackaday, which is a shortening of the term alackaday—from the expression "alack the day" (alack itself being an interjection used to express sorrow or regret, so the expression roughly means "a day of sorrow or regret"). William Shakespeare uses the expression "alack the day" in his tragedy Romeo and Juliet: "He's dead, he's dead, he's dead! / We are undone, lady, we are undone! / Alack the day! He's gone, he's kill'd, he's dead!," reports the Nurse to Juliet. In the mid-1700s, this led to the formation of lackadaisical as a word suggesting "lacking life, spirit, or zest"—or, in other words, lacking the "carpe diem" attitude.

The variants using oops and whoops share the meaning of upsy-daisy, but they also have an extended meaning. Like their base words, they have become ways to express typically mild apology, surprise, or dismay over a figurative stumble or slip—or an egregious mistake or accident.

Complicating matters is the fact that Second Wife seduced her unnamed husband while he was still married to First Wife—whoopsie daisy!
— Eugenia Williamson, The Boston Globe, 3 September 2017

Early uses of both interjections, oops and whoops, are found in print in the early 20th century, and it is believed that whoops is a variation of oops. Whoop, however, has an interjectional pedigree: since the 16th century, it has been used as an exclamation expressing such emotions as excitement and surprise (as the Fool in Shakespeare's King Lear exclaims, "Whoop, Jug, I love thee!")—which isn't a far cry from whoops.

If you hear or find yourself saying oops and whoops, please don't "alack the day" and act lackadaisical thereafter—it's not worth the whoop. Rather, straighten out whatever mishap occurred and then whoop it up later.