The Languid Story of 'Lackadaisical'

From "expression of woe" to "why bother?"

When we look at the histories of certain words the English language appears to be the result of hundreds of years of well-thought deliberation. How else could we have taken this glorious mess of borrowings, with seemingly indiscriminate adoption of words from dozens of languages, and put it together into a workable tongue? But then we come across a word such as lackadaisical, and realize that sometimes words come about through the wholly scientific process of "just write some words down … you know, that thing what’s-his-name always says…." 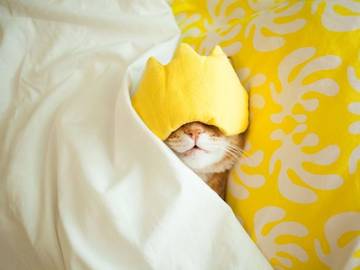 "Whatever it is, it can wait."

In current use lackadaisical is most often found to mean “feeling or showing a lack of interest or enthusiasm,” and often carries the intimation of laziness or indolence. However, the earliest use of this word is sometimes defined as “characteristic of one who often says ‘Lackaday!’” This sense is not often found in modern English (nor is lackaday, for that matter). So how did we get from “often says a very specific word” to “couldn’t be bothered”?

The earliest known uses of lackadaisical come from the writing of Laurence Sterne, and it's also found shortly after in the writing of authors who wrote in a similar style.

Would to Heaven! my dear Eugenius, thou hadst passed by and beheld me sitting in my black coat, and in my lack-a-day-sical manner, counting the throbs of it, one by one, with as much true devotion as if I had been watching the critical ebb or flow of her fever.
— Laurence Sterne, A Sentimental Journey Through France and Italy, 1768

The Domestic Tornado. A Fragment. In Imitation of Sterne. My wife, I say, entered the room, where I was sitting with my elbow resting on the lable, and my head carelessly leaning on my hand, in one of my lackadaisical mood, musing over the hapy prospect of my country under the auspices of the federal government, and the blessings of domestic and matrimonial life.
— Vermont Gazette (Bennington, VT), 23 May 1791

As seen by the his choice of spelling, Sterne was obviously referencing lackaday (also written as lack a day), an expression common in the 17th and 18th centuries which was used to express regret or deprecation.

Oh lack-a-day forsooth, no, no forsooth, but if it must be so forsooth I humbly thank you.
— T. Porter, A Witty Combat, or, The Female Victor, 1663

Good lack a day, Madam, this Gentleman has a bottomless understanding.
— Thomas Shadwell, The Sullen Lovers, 1668

Lack a day! says one of the accomplish'd, in what a lamentable condition have I seen a mortal Clergie-man, when he has ask'd for a Son or a Daughter that has been dead a Month.
— John Eachard, Some Observations upon the Answer to an Enquiry, 1671

Lackaday in turn came from the slightly earlier expression alackaday, which itself came from alack the day.

I, I, alacke a day, Nor doe I sue to have him up in prison, Alacke a day, what good (good gentleman) Can I get by his body?
— Richard Brome, The Antipodes, 1640

Puh, what needes all this stirre Master, suppose yee have found her to want a graine or two, doe but consider of it, 'tis nothing amongst friends; alacke a day sir, the Goldsmith himselfe may be cosen'd with a light peece, ant shall please your worship.
— Robet Chamberlain, The Swaggering Damsell, 1640

All of these may be traced back to alack, a word in use since Middle English, used to express sorrow or regret. We still see evidence of alack, often paired with alas, used in a jocular, faux-old-English manner.

Almost all of the earliest citations for lackaday and alackaday are found in plays, indicating that such use was intended to replicate a spoken, rather than written, form of English. So we see that an interjection (alack) takes on a longer form (alack the day), which then changes its appearance once or twice (lackaday), gets picked up by an Irish comic novelist (Sterne), has some orthographical shifts (lack-a-day-sical, lack-a-daisical, lackadaisical), and, after going through some semantic drift, ends up as the perfect word with which to describe your spouse’s approach to housecleaning. Who says the English language doesn’t make sense?