A Reading Break on 'Laurel'

Rest on your laurels, but not too long. There's more to do.

A laurel is a shrub that was traditionally used to weave wreaths and crowns that were symbols of victory in the sporting events of Ancient Greece. Today, laurel is synonymous with achievement, and a laureate is one who an award or achievement is bestowed upon. The word also appears in the phrase resting upon one's laurels, in which one is satisfied with their previous successes and makes no attempt at any other. 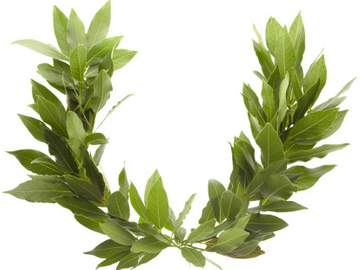 Laurel is the name for an evergreen tree or shrub having attractive shiny, pointed leaves. The plant is also known as the bay or sweet bay (and, yes, its leaves are the dried bay leaves that are used in cooking). In ancient Greece, its foliage was intertwined to form crowns, chaplets, garlands, or wreaths as symbols for victory achieved by athletes in the Pythian games, chiefly those held at Delphi, at which various athletic and musical competitions were held in honor of Apollo, the Greek (and Roman) god of sunlight, prophecy, music, and poetry. The Pythian games took place in August of the third year of each Olympiad, which is the 4-year period between the Olympic Games; the interval between them is referred to as the Pythiad.

The connection of the laurel with Apollo traces to mythology. As the story goes, Apollo fell in love with the river nymph Daphne, who rejected every lover, including the poetic god. When Apollo pursued her, Daphne prayed to be rescued, whereupon she was transformed into a laurel. Apollo, in turn, embraced the tree. In time, the laurel's leaves and branches were appropriated as an emblem of triumph and distinction at the Greek games. The god Apollo is often depicted wearing laurel on his head, and notably also is Roman general Julius Caesar and the notorious French general Napoleon Bonaparte.

The English terms laureate, poet laureate, and Nobel laureate—all of which name a recipient of honor or recognition for achievement in an art or science—are associated with the ancient Greek (and Roman) tradition of honoring or recognizing achievement by bestowing laurel upon a deserving individual. Today, the word laurel, usually in plural form, also signifies any honorable recognition without the presentation of the decorative leaves and branches.

Roberts played volleyball and softball at Northwood High School, where she holds both the shutout and strikeouts in a game records. The Broadford, Va. native racked up county, area, district, region, and state honors to go along with team MVP laurels.
— The Greeneville (Tennessee) Sun, 29 Jan. 2021

In Modern English, laurel often occurs in the idiomatic phrases "to rest/sit on one’s laurels," meaning "to be satisfied with past success and do nothing to achieve further success," and, in British English, "to look to one's laurels"—that is, "to work in order to keep your success or position."

Here in Canada, some of the major publishing houses, Penguin Random House, HarperCollins Canada and many small independents, are run by women. Have we won the battle? You can't rest on your laurels is all I would say because there was a moment in Britain when we had the same thing. And then each of those women moved on, retired, whatever.
— Deborah Dundas, The Toronto Star, 28 Dec. 2020

I think Larry is particularly fond of our school's mission and he and the Connor Group have been big supporters going back six or seven years. … He's someone who puts his money, his time and his resources where his mouth is. A lot of people in his position would just sit back on their laurels, but he has no interest in doing that.
— David Taylor, quoted in The Dayton (Ohio) Daily News, 26 Jan. 2021

Adele had better start looking to her laurels ... "She's the posh Adele," the bloke next to me says to his girlfriend and he has a point. You could also describe Freya Ridings as Florence Welsh on steroids, a belter outerer of massive, piano-driven pop songs which have already made her a Spotify sensation.
— Stuart Clark, Hot Press, 31 Aug. 2019

Other less common collocations are "to reap one's laurels," "to win one's laurels," "to repose on one's laurels," or "to retire on one's laurels"—all of which now serve as cautionary expressions. In the past, figuratively settling on your laurels implied that you did great deeds or attained great success or achievement, and you can now retire and rest (on your laurels). That's not the case in modern day, and usage evidence of metaphorical laurel tells that. Today, a person might have earned laurels, but usage of the phrase implies that they cannot rely on that past good reputation or achievement as an excuse for not being ambitious in the now—that is to say, earning laurels isn't a free pass to be lazy.