And how the bird got its nickname

To gobble something typically means to eat it quickly or greedily, but gobble has a specific turkey-related sense in reference to the guttural sounds the bird makes. Gobbler is a common nickname for a male turkey, in addition to the generic meaning "one that gobbles." 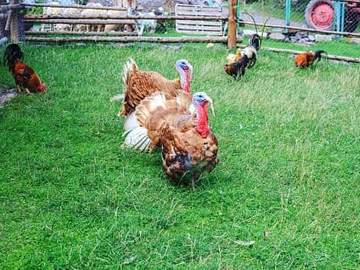 Hope you brought your appetite.

The holiday season, with its near-endless occasions to eat heartily and its near-ubiquity of a certain flightless bird, may give many an occasion to consider the humble verb gobble. The word, meaning "to swallow or eat something quickly or greedily," dates to the 16th century and is likely derived from the earlier noun gob, which is used as a name for a lump or large mass (as of food digested or unappetizing phlegm expectorated). In extended use, gobble denotes taking or grabbing something eagerly or suddenly. One might also "gobble a book," meaning "to read rapidly."

Industrial buildings, including warehouses and distribution centers, are in high demand as more and more people shop online. That trend has only accelerated during the pandemic. Major companies like Amazon have recently gobbled up big chunks of industrial space.
— Kathryn Hardison, The Austin (Texas) Business Journal, 11 Nov. 2020

The book starts with a fascinating portrait of the ghost hunter as a young woman, casually gobbling up books by the Austrian parapsychologist Hans Holzer (the investigator of the "Amityville Horror" house).
— Allison P. Davis, The New York Times, 26 Oct. 2020

As the examples illustrate, this gobble is often served beside the particle up or down.

Figuratively, gob is dished up in expressions like "making gobs of money." There is also gobbet, a sometimes diminutive of gob that can be considered a morsel of a gob—for example, "a gobbet of meat/information." Both gob and gobbet derive from Anglo-French gobet, meaning "mouthful, bite, or piece."

Gobbler carved its way into 18th-century English as the nickname of the male turkey, but not in reference to the bird’s noisy eating style. The gobble in this sense of gobbler (as opposed to the more generic “one that gobbles” meaning) is of imitative origin from the bird's characteristic guttural noises. Although print evidence of the expression "to talk turkey" in reference to making a sound resembling the bird's is scanty if not nonexistent, it is common as a phrase, going back to the 19th century, suggesting frank or blunt speech, and people do sometimes "gobble"—that is, talk noisily or indistinctly like a turkey. The related "turkey" verb gobble predates gobbler; it is first recorded in the 17th century.

Let's talk turkey. Because of COVID-19 and the threats of spreading contagion, Thanksgiving will be a scaled-down celebration this year for many Americans.
— Pamela Stallsmith, The Richmond (Virginia) Times Dispatch, 13 Nov. 2020

I'm all for banning cell phone use on airplanes. Having to listen to fellow passengers gobble on about their business or personal lives for hours would certainly make flying torture.
— Anne Schneider, The Idaho Statesman, 9 Feb. 2011

Hopefully, you saved room for our next course and the story of how the large, ungainly bird known scientifically as the Meleagris gallopavo came to be called the turkey.