The word has been moving slowly through English for centuries.

We understand that the word creep and its connotations are rather unpleasant, but we'll do our best to make this an enjoyable read. From a lexicographical standpoint, creep has been a special contributor to the English language—etymologically, semantically, and derivatively—for centuries. (It even gave us the fun reduplicative creepie-peepie, so it can't be all bad, right?) 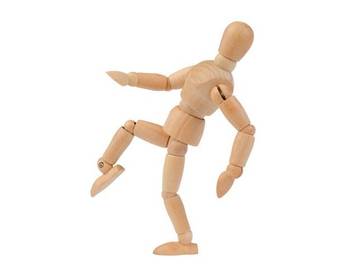 The "skin-crawling" sense dates to the 14th century.

Creep first appears in Old English as the verb crēopan, which has Norse and Germanic roots. Early uses of the verb relate to the familiar "movement" senses describing the locomotion of a limbless creature (like a snake or worm) or a short-legged one that walks close to the ground (like a spider or lizard, or even a bird—all of which are considered creepers, along with sprawling plants and vines). Nowadays, crawl is more usual in describing such movement, but the interchangeability led to the catchy 19th-century formation of creepy-crawly, the name for, well, creeping/crawling creatures.

(Humans also creep and crawl on hands and feet or in a crouching posture or on the elbows and knees. This kind of movement is regarded as "cute" when it's done by exploring infants, but tends to become increasingly eerie with age.)

In the 14th century, the verb is used to refer to the supposed swelling or shrinking of skin especially in response to feelings of apprehension, fear, or disgust. Charles Dickens' Barnaby Rudge illustrates: "You make my hair stand on end, and my flesh creep" (which he says before collapsing in "a shivering fit"). Although there's a word for this phenomenon, it has not been scientifically proven that the skin reacts physically to emotional experiences. Early print evidence suggests—we are saying "suggests" because it depends on one's interpretation of the context—that the similar sense of the verb crawl, as in "seeing the snake swimming in the pond made my skin crawl," may have entered the language around the same time. Regardless of the past and science, both skin and flesh are still said to creep and crawl.

In the 18th century, people began talking about experiencing "creeping" or "the creepings" on, and even in, their skin, often relating it to the sensation of cold water trickling down their back. They also spoke of formication, which refers to a sensation that resembles insects creeping on the skin (in Latin, formica means "ant"). Such creeping sensations could be physiological or pathological, depending on the case study.

He could give me no other explanation of his sufferings than that he had dreadful creepings from his head to his feet, so that he had no sleep nor rest night nor day—he could not bear his weight, he said. I replied that such creepings were very common, and I had no doubt but I could cure him if he would follow my advice, for I had seen many persons who had been cured. "Ah, but I suppose those were natural creepings; but mine are unnatural. I can never be any better, I know I cannot." I endeavored to inspire him with courage and confidence in me, and promised to return the next day, which I did.
— Water-Cure Journal, 15 June 1846

Your creepings are surely the effect of overlabour of the brain and intense application.
— Fanny Burney, letter, 25 July 1799

In the next century, people began to use "the creeps" for these sensations, and the term became directly associated with feelings of unease, horror, disgust, or fear, as in "That strange man standing in the corner gives me the creeps." The related phrasal verb creep out, meaning "to give (someone) the creeps," debuts much later—in the 1980s. Maybe the baby boomers just wanted to repress creepiness or simply couldn't find the expression for it until people began using freak out more and more.

The strange guy who creeps out people is first referred to as a creep in the late-19th century. There is not much to say about this suspicious person, other than that he looks or prowls about like a small creature ready to pounce and gives you the creeps—the lexical connections are evident in that description. However, the name did tend to be applied to "sneak thieves," especially those who roamed "creep joints" (brothels or gambling houses). Creeper was another name for such creeps and that connection led to creepers as an American slang term for shoes with soft soles that provide stealth to thieves—earlier words for the shoes were sneaks and sneakers.

Another semantic development of the word creep was as an acronym. History buffs might recall that CREEP was used by critics of the Committee to Re-elect the President during the Watergate affair. (The committee itself preferred the abbreviation CRP.)

President Richard Nixon, on the other hand, who loathed the press, used Spiro Agnew, his vice-president, as a hatchet man to attack journalists who wrote critically about the administration. When five burglars were caught red-handed breaking and entering Democratic National Committee headquarters at the Watergate office complex on June 17, 1972, therefore, editors and reporters at the Washington Post were willing to contemplate the unthinkable—that the burglars might have ties to the Committee to Re-elect the President ("CREEP") and ultimately to the White House—and they launched an intense journalistic investigation that ended up with Nixon resigning….
— Elliott Epstein, The Sun Journal (Lewiston, ME), 23 July 2017

Although invented in the mid-1900s, there was not a creepie-peepie, creepy-peepy, or peepie-creepie—all of which are names for a handheld television or video camera—capturing the Watergate "creeps" in action. The names for the camera are self-descriptive (based on the verbs creep and peep). They were created along the lines of the earlier name, walkie-lookie, which itself mimics walkie-talkie, the name for a portable radio transmitter and receiver.

"Out of Thin Air" doesn't talk much of the technological breakthrough that transformed news gathering either, except to mention the first wireless television camera and microphone, developed by NBC's parent company, RCA. At first called the "walkie-lookie" it was later dubbed, more appropriately, [Rueven] Frank says, a "creepie-peepie."
— Philip Herter, The San Francisco Chronicle, 23 Aug. 1991

As a PSA: Be aware that a creep or the creeps come on slow—sometimes imperceptibly, as in glacial or budget creep (marked by a slow but persistent increase), or "mission creep" (a late 20th-century term for the gradual broadening of the original objectives of a mission or organization). Keep your eyes open. The creeper is evasive and deceptive.