Within a dictionary entry, the dots that break up a word are known as end-of-line division dots. These dots indicate where the word can be broken if it doesn't fit on a line of text. These dots do not indicate the possible syllable breaks of the word; syllable breaks are shown with hyphens in the pronunciation.

While looking up a definition of a word or perusing our many language resources and articles on Merriam-Webster.com, you may have noticed that the centered dots in headwords do not always match the placement of the hyphens in their pronunciations. As a company, we have dealt with decades of correspondence concerning these suspected incongruities and feel that an explanation on the uses of what are commonly called end-of-line division dots or points and syllabic hyphens would be of interest to you, dear website visitor. 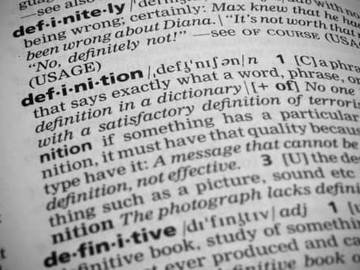 No, the conventions for dividing a word at the end of a line of text and the conventions for dividing a word into phonetic syllables are not the same, and as a result a headword and its pronunciation may show different divisions. The centered dots/points in a headword—which are chiefly determined by considerations of morphology (the study of word formation, as by inflection, derivation, and compounding) and of pronunciation—indicate the places where it can be broken if all of the letters will not fit at the end of a line. They do not necessarily show syllable division (which is the common misconception); they are simply potential points of end-of-line division. Syllabication of a word is indicated by the hyphens found in the word's pronunciation, where they exist as aids to the pedagogical command of "sound it out."

Take, for example, the word dictionary.

At the head of its dictionary entry, it is divided as dic·tio·nary. This means that it can be broken at the end of a line as dic-tionary or as dictio-nary. It could not, however, be divided as d-ictionary, di-ctionary, or dicti-onary, mainly because it would make the word difficult to read. Note, also, that there is not a dot before the final y in the headword, even though there are four syllables in the word, as shown in the pronunciation \ˈdik-shə-ˌner-ē\.

This is because having a single letter divided from a word, at the end or beginning, can impede the reader's decoding. Another example is the simple but multipurpose about. Although one might be tempted to divide it after a, as shown in its pronunciation \ə-ˈbau̇t\, leaving the letter stranded on a line is wrong.

Poker is an elucidating example of word division. There are two noun entries for the word: one for a metal rod for stirring a fire and one for various card games. The homographs of poker are pronounced the same, as \ˈpō-kər\. Yet, for the "rod" entry, the orthographic word division is pok·er, and for the "game" one, the division is po·ker. The reason for this is that the first homograph (the rod) is made up of two parts (or morphemes): the stem poke and the suffix -er. English spelling division rules require words to be divided between different morphemes so we get the division pok·er. However, the second poker (the game) does not have two parts. It consists of one morpheme (it is a modification of the French poque) so it gets divided as po·ker.

Taking a break from end-of-line division, there is the hyphen in pronunciations that we need to address, which indicates a syllable break that is based on technical phonetic principles, such as vowel length, nasalization, variation due to the position of a consonant in a syllable, and other nuances of the spoken word. Generally, it is placed so as to put as many consonants at the beginning of a syllable as English will allow at the beginning of a spelled word. Hence, a word like entrance is broken as \ˈen-trən(t)s\, rather than \ˈe-ntrən(t)s\ or \ˈent-rən(t)s\, because \tr\ is a possible initial consonant cluster in English, while \ntr\ is not. Another example is explode, which is divided into two syllables, as \ik-ˈsplōd\. There is a four-consonant cluster in this word, \kspl\. Conceivably, the word division could be \iks-ˈplōd\ or \iksp-ˈlōd\; however, \ks\ and \ksp\ are not the largest possible consonant clusters in the word. The largest cluster that can begin a word in English is \spl\, as found in the words splash and splurge. Thus, the placement of the hyphen is after \ik\. 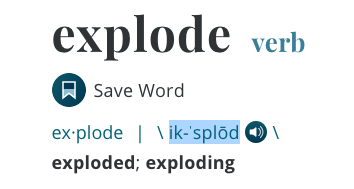 If you have been taught that words can always be divided between syllables, you should now know that this is not always true. Remember, it is technically incorrect to divide a word such as ocean so that a single letter is left stranded on a line by itself, even if the hyphen in the pronunciation shows the syllable division as \ˈō-shən\. Look to the headword for the spelling division dot; look to the pronunciation for syllable division.