'Tis the season, in which 'tis is an old contraction for "it is," is a phrase heard during the winter drawing attention to what's known as the "Holiday Season." Its association with the winter holidays, rather than any other season, comes from its use in the popular carol "Deck the Halls with Boughs of Holly" in the line "'Tis the season to be jolly." Though the song is a centuries-old Welsh tune, the phrase didn't start appearing in newspapers and magazines until the 1970s. 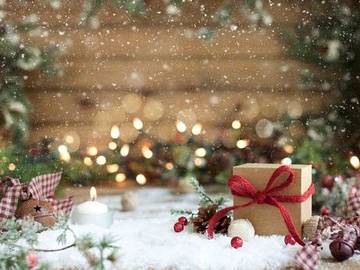 Now have a cup of cheer.

The simple answer is that it is the season, as in, it is the time of the year that is also known broadly as the holiday season and more narrowly as the Christmas season. The statement "'Tis the season" is simply a way of drawing focus to the festive time of year when it's currently underway.

'Tis the Season for Caroling

But of course we don't go around saying "'tis summer" when it's summer, so one can't rightly deny that there's something more to the phrase. And that something more is this: 'tis the season is an allusion to one of the most famous Christmas carols, "Deck the Halls with Boughs of Holly":

Deck the halls with boughs of holly,

'Tis the season to be jolly,

The song functions culturally as a constant earworm for many people during the month of December. Its tones ring out from radios and store speakers alike, and chances are, if you listen carefully, you will hear someone humming it at any given moment in the days leading up to the year's close. And right there, in the song's best-known lyrics, are the words "'tis the season."

While the song is centuries old, the phrase hasn't been the stuff of cheery headlines and chirpy titles for as long as one might think, given its current (seasonal) ubiquity. In fact, it wasn't really until the 1970s that we started to see it popping up in magazine and newspaper articles.

Origins of "Deck the Halls"

The song is not new. Its melody, Welsh in origin, is recorded as far back as the 1784 Musical and Poetical Relicks of the Welsh Bards. (It's also associated with the Welsh song "Nos Galan," meaning "New Year's Eve.") The lyrics first appear in the 1881 book The Franklin Square Song Collection, published in New York, with no lyricist credited. The Song Book: Words and Tunes from the Best Poets and Musicians, published in London in 1884, reports that the English lyrics are Thomas Oliphant's translation of Talhaiarn. (Oliphant was a lyricist and long-time member of the Madrigal Society, serving as (in turns) its secretary, vice-president, and president, the first of those positions beginning in 1832; Talhaiarn, who was also known as John Jones, was a Welsh poet and architect.)

What's clearly been lost to modern hummers of "Deck the Halls" is the importance that harps historically played in renditions of the song. Composer and conductor John Rutter explained it to National Public Radio's Bob Edwards on "Morning Edition" in December, 1994:

'Deck the Halls With Boughs of Holly.' Well, that certainly originated in Wales, and that much we do know, but, it was originally meant to be performed by a group of singers and a harp, and the idea was that the singers would come up with the first line, 'Deck the hall with boughs of holly,' and then the harpist would improvise the next line, and then they'd sing the line after that, 'Tis the season to be jolly,' and the harpist would play something. And, you know, a few drinks would be taken and everybody would have a wonderful time, and you'd get a carol out of it. But, of course, that only worked in Wales where they had harpists on every street corner. You see, it's the national instrument. Well, outside Wales, what do you do when you don't have a harp? So, what people did was just sing 'Fa la la la la.' So, actually, when you sing 'Deck the hall with boughs of holly, fa la la la la, fa la la la,' you're actually filling in for a harpist that is missing. And so it's worth remembering that if you ever want to do that you should really find the budget to hire a harpist.

What Does 'Tis Mean?

As for the first word in the song—which is, of course, what really makes the phrase stick out—that 'tis is simply an old contraction of "it is," long since pushed out of common use by it's. While 'tis dates to the 15th century, and it's to the middle of the 16th, it's had become the fully dominant contraction by the 18th century, leaving 'tis to mostly languish in the language's background until (since the 1970s) the daylight hours dwindle, the twinkly lights twinkle, and the word emerges, covered in last year's tinsel and pine needles, to orient readers to the new holiday season at hand. 'Tis the season, all.