Why Is It Called an 'Adam's Apple'?

It's not the reason you think.

Ask the Internet why the bump on the front of our necks is called an "Adam's apple" and you'll most likely get a tale that sweeps you back to the Garden of Eden just in time to see the Bible's first man, Adam, choke on a bite of forbidden apple that the first woman, Eve, has convinced him to taste (having herself been tempted to nibble by an evil serpent). According to the story, God made a chunk of apple get stuck in Adam's throat as a reminder of his sin—and the reminder was then passed on to all men ever after, with the moniker "Adam's apple" attached to make sure no one forgets.

But the common wisdom of the Internet is wrong on this one. The name of the bump on the front of the neck—which is found in all humans but is usually more prominent in men—has nothing to do with Adam or Eve or the Garden of Eden. 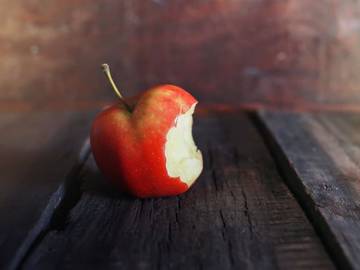 Note to self: eat more fruit.

The term Adam's apple (or technically "laryngeal protuberance," formed by the largest cartilage of the larynx) has been used in English since at least 1625. It goes by analogous names in other European languages, among them French (pomme d'Adam; the French also use morceau d'Adam—"Adam's morsel"); Italian (pomo d'Adamo); and German (Adamsapfel). But decades before (and after) Adam's apple came to refer to that anatomical item, it was used as a term for several edible items of the fruit variety, among them plantains, pomelos, and citrons. This rather (from a modern perspective, anyway) willy-nilly application of the term was in keeping with a habit that dates at least to medieval times, when European writers used Latin variations on the same theme—pomum Adam, pomum Adami, Adami pomum, etc. —for various fruits, among them the cherished pomegranate. The implication was likely that the vaunted fruit belonged in the category of those "fruits of Paradise" supposed to have been enjoyed in the long-lost Eden.

Meanwhile, medieval Arab medical writers were dealing with throat anatomy by way of analogy with the same fruit, and they settled on "pomegranate" as a name for the laryngeal protuberance. What inspired the name is unknown. Was it physical resemblance—did the texture of the skin of the pomegranate remind them of the texture of the skin covering the protuberance? Or was it something symbolic? The pomegranate has long been a potent symbol in literature and religion: the biblical King Solomon had an orchard of pomegranates; in Greek mythology, it was Persephone's act of eating a single pomegranate seed in the underworld that doomed her forever to spend 1/3 of every year in Hades; and the prophet Muhammad reportedly recommended pomegranates: "Eat the pomegranate, for it purges the system of envy and hatred."

Whatever the reason the medical writers had for calling the laryngeal protuberance a "pomegranate," it's likely that European writers saw that designation in its Latin translation, pomum granatum, and then applied the synonymous Latin pomum Adami to the same body part. The author of a late 16th century anatomical work reports that both pomegranate and Adam's apple were being used in the common language to refer to the larynx: "…partem protuberantem, que malum granatum et pomum Adami barbaris dicitur constituit." Other authors from the same time period also give pomum Adami as the Latinization of the vernacular name Adam's apple. Proving that making up stories to explain word origins is nothing new, we have 300-year-old explanations that mirror the Internet's current batch. An explanation by one John Purcell in 1707 goes as follows:

… an eminence or protuberance plain to be felt and seen in the neck, which several anatomists call Pomum Adami or, the Apple of Adam, from a vulgar superstitious notion that when Adam eat the forbidden Apple it stuck in his Throat, and that God to perpetuate the memory of this his offence plac'd the like protuberance in the throats of all his posterity; which is not quite so apparent in Women, because, say they, the Crime of Eve was less…."

To which we say: No, Mr. Purcell, it's called an Adam's apple because the Latin term that translates to English as "Adam's apple" used to be a term for a pomegranate.

One additional note: there's another theory that says that pomum Adami is a translation of a Medieval Hebrew phrase tappūăḥ ha'ādhām, meaning "protuberance on a man," and that this phrase was reinterpreted as "Adam's apple." We're afraid that this theory, which dates to the 19th century, has no basis in fact: no such expression with this meaning has been located in pre-Modern Hebrew.