: the projection in the front of the neck formed by the largest cartilage of the larynx

Note: There are analogous names in other European languages, e.g., French pomme d'Adam, morceau d'Adam, Italian pomo d'Adamo, German Adamsapfel, etc. Medieval authors, as Jacques de Vitry, applied pomum Adam(i), Adami pomum, etc., to various kinds of fruits, as the pomegranate, perhaps originally from their supposed superior quality (i.e., "fruits of Paradise"). According to Elmar Seebold (Kluge, Etymologisches Wörterbuch der deutschen Sprachen, 24. Auflage, 2002), medieval Arab medical authors called the laryngeal protuberance the "pomegranate"—pomum granatum in Latin translation—and the synonymous pomum Adami may have been copied in European vernaculars as a name for the laryngeal protuberance (a case of sense borrowing, and then sense transfer to a synonym). Caspar Bauhin, in his anatomical work De corporis humani fabrica libri quattuor (Basel, 1590), notes that both "pomegranate" and "Adam's apple" are vernacular words for the larynx ("… partem protuberantem, que malum granatum et pomum Adami barbaris dicitur constituit."). Other anatomical authors also have pomum Adami as the Latinization of a vernacular name (André de Laurens, Historia anatomica [Lyons, 1605]: "Huius suprema pars brónkhos, quibusdam vulgo morsus & pomum Adami appellatur"; Gabriele Falloppio, "Institutiones Anatomicae," in Omnia, quae adhuc extant opera [Venice, 1584]: "… quam prominentiam aliqui vulgares appellant, Adami pomum"). This expression has not surprisingly been subject to folk explanations, e.g., John Purcell, in A Treatise of Vapours, or Hysterick Fits (2nd ed., London, 1707), says "… an eminence or protuberance plain to be felt and seen in the neck, which several anatomists call Pomum Adami or, the Apple of Adam, from a vulgar superstitious notion that when Adam eat the forbidden Apple it stuck in his Throat, and that God to perpetuate the memory of this his offence plac'd the like protuberance in the throats of all his posterity; which is not quite so apparent in Women, because, say they, the Crime of Eve was less …." The notion, which according to Seebold goes back to the 19th century, that pomum Adami is a translation of a putative Medieval Hebrew tappūăḥ ha'ādhām (alleged to mean "protuberance on a man," supposedly reinterpreted as "Adam's apple") is specious. No such expression with this meaning has been located in pre-Modern Hebrew.

1625, in the meaning defined above

Why is it called an 'adam's apple'? 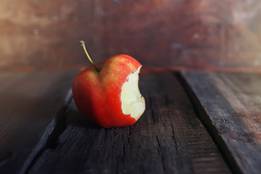 Why Is It Called an 'Adam's Apple'?

It's not the reason you think.

noun
Ad·​am's apple
ˈad-əmz-
: the lump in the front of the neck formed by the largest cartilage of the larynx

: the projection in the front of the neck that is formed by the thyroid cartilage and is particularly prominent in males

More from Merriam-Webster on Adam's apple